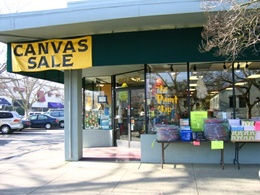 The front of The Paint Chip. 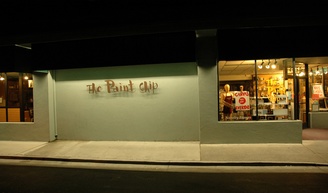 The Paint Chip's side logo looks cool at night time.

The Paint Chip is an independent, family-owned and operated art supply and custom framing store. It was established in 1988, but changed ownership in the spring of 2008. However, the store itself and the majority of the staff did not change at all.

The art supply section of the store has everything a beginner or serious artist could want. Paints, mediums, pencils, pastels, markers, charcoals, and many other art supplies are available from student grade to artist grade. There are also many sales consistently running throughout the store. Canvases are always 40% off, or 50% off if you buy at least 10. The individual paint tubes (oil, acrylic, watercolor, and gouache) are also on sale. If you buy 3 or more, you get 15% off, and if you buy 10 or more, you get 20% off.

The Paint Chip's main pride and joy, however, is the custom framing section. They carry everything from simple to ornate, and mats of all colors, textures, and fabrics. Whether it's a kid's drawing or a priceless painting, they will treat it with the utmost care and find the option that is best for you. Custom framing takes between 7 business days and 3 1/2 weeks depending on the materials used.

The Paint Chip staff is also is friendly, knowledgeable, and artistic, and are happy to help you find whatever you need, whether it be a 65-cent eraser or an elaborate framing order.

Students can bring in their student ids or class materials list and get 10% off all art supplies.

There is a mural on the eastern wall of the Paint Chip by local artist Linda Galusha. It is great example of both art and product demonstration. 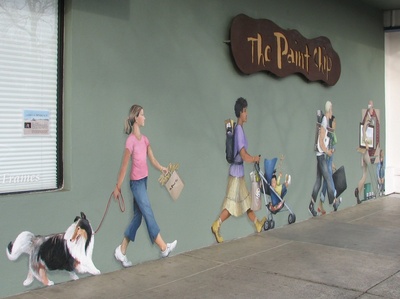 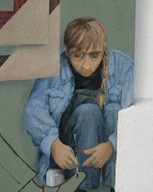 detail of the artist

2006-05-16 09:06:04   My wife and I took a poster here to be framed. It looks great; they did a good job with it. However, it took several days beyond what we were told in order for it to be finished. It's been several months, but I believe we were told it would be done on a Thursday, and it was nearly a week after this that the framing was actually completed. —AdamSchneider

2007-03-18 16:25:40   These guys always do a good job. I get stuff there very infrequently but am always amazed at how much it costs. Like buying a new mattress. Prices are comparable to mall stores, but Paint Chip has better quality materials, is local so money stays in town. —UsetheForce

2008-02-29 00:22:32   Paint Chip seems reasonably priced to me because they have good quality and variety of brands. It's also easy to find things and customer service is decent. Plus when they have a sale on canvases it's really affordable. It can be a little deceptive when you see mostly frames in the store, though. Overall, they are an 8 out of 10 for an art store that satisfies your basic needs, especially for someone just starting out in a type of art. For those more advanced you may still have to look elsewhere, say online. —mikam

2008-08-06 19:28:08   The customer service is great at this store. However, I have never actually bought anything here because they don't seem to carry the things that I need. (They offer to order what they can, but I typically can't wait for an order to come in) To their credit though, I think the focus is more on framing than art supplies. —Chantal

2010-03-21 18:40:11   I shop here for painting supplies and enjoy the patient staff and excellent service. Recently, when the product line I wanted was not in store, the staff ordered the materials on the spot with a 20% discount. —EdwardRiggins

2010-08-05 16:33:02   This place is a great little shop! I got. Nice starter acrilic pait set and a few other things! They had a sale going on so I feel like I got a lot of stuff for not that much money. The ppl are nice there and very helpful! They answered all my queation even some of the silly ones! Awesome place can't wait to start painting and trying out the tip they gave me! —JackieRodriguez

2013-03-05 20:24:18   I recently used the Paint Chip for a custom framing job and had a bad experience. I dropped off my framing job in early November and was charged for the job the next day. However, later that week I received a call that the framing supplies I had ordered were out of stock and would probably be back in stock around the turn of the new year. In mid-January, I called to check on the status of the job and was told they were still out of stock and would probably be done in early February. When I called the second week of February, I was told that they were still out of stock, but that some sample pieces which were similar to what I had ordered would be coming in within the next two or three days and I would receive a call to tell me when I could come in and look at them to possibly change my order. However, I still did not receive a call. Two weeks later (beginning on March), I went in with the intention of pulling my art piece and demanding a refund of the payment that was originally charged in November. At that point I was told that they had finished the framing job and had called and left a message on 2/13 that the job was completed. I never received the message, nor had they tried to call back in the intervening two weeks. I don't know if they would have eventually tried to call again, but two weeks is FAR too long to wait for a follow-up call, especially on a job that had been waiting for over three months! I don't blame the staff for the fact that the manufacturer was out of stock for so long, but the communication/customer service was absolutely atrocious! In addition, when I called in January to check on the status of the order, the employee who answered the phone initially couldn't find my art work! Keep in mind that this is an expensive custom commissioned piece of art with enormous emotional value. In addition to all of this, the employees I dealt with did not seem to be upset that it had taken them so long to fill the job or that I had had a bad experience with them. I will definitely NOT be using Paint Chip again. —ErinAL