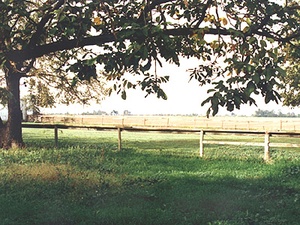 The Russell Ranch was established by the Russell family in the mid-19th century. They lived and worked on the ranch for nearly 150 years. The family home, the Russell-Ham House still stands and is located near the intersection of Russell Blvd. and County Road 95. The ranch and the house were sold to UC Davis in 1990 for $7.88 million by William Russell and Charlotte Russell-Ham.

Agricultural activities continue on 815 acres of the ranch - farming of alfalfa, corn, wheat, tomatoes and fruit, and goat herding. UC Davis uses 765-acres for large-scale agricultural and environmental research programs, such as LTRAS. It is also home to the Russell Ranch Wildlife Area. Plans to move the UCD Equestrian Center to the ranch were announced in 2004, but these plans have been either canceled or postponed indefinitely.

The Russell Ranch has no connection to the commercial equestrian facility of the same name.