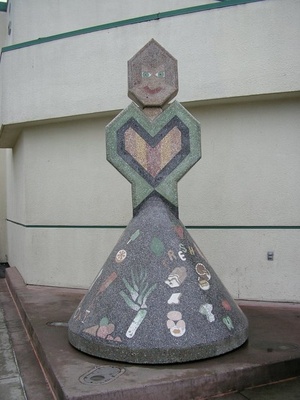 Towering over 9 feet into the air, the "statue" ominously smirks down at customers as they walk towards the east entrance of Save Mart on Anderson Road. If you examine the statue's skirt, you'll be reminded of all those little things you almost forgot to buy—like an enormous lobster. Many wiki-users question why a 40 is not among those food items represented on the skirt. Highschoolers who visit the shopping center at lunchtime often joke about the statue, and claim it is rumored to come alive at night and prey on the blood of drunken college students trying to get into Save Mart. Most people think this statue is pretty ugly. The aesthetic virtues of this statue have been the subject of lively debate and even informal web-polls.

The statue is arguably another piece of town art. It is not however listed in the City's public art collection. It may well be functional art; not a sculpture at all, but rather a decorated concrete cap covering a mess of pipes or an electrical transformer. The access covers and general shape seem to imply this, as does the position at the former edge of the property line before the plaza was extended.

Because of this fact, it might not be the ugliest statue, but rather the prettiest concrete cover in Davis. Or at least one of the most colorful by design.

2005-04-01 05:34:43   Mein gott... I didn't realize that was permanent. I had commented that it looks like a sexual device used in the posterior. It *must* be a functional statuary - note the access covers. Bet there's a "Christmas tree" of natural gas pipelines or something underneath that

A "christmas tree" is a type of pipeline that juts up from the ground and allows access to a variety of pressures and pipes. A picture of one can be found here. I'm serious about the access covers and the location on the corner of an extended lot - it is likely a functional work to cover up part of the infrastructure that used to be in the corner and is now in the center of the area. These concrete caps are required and are sometimes mistaken for art (although this one is dressed up), similar to how the spherical concrete crash guards (in front of the east end of the tennis courts on campus or in front of Fry's in Sacramento) are mistaken for mere decoration. Like many required functional pieces, it has been made to look decorative, likely by a low bid contractor with hideous taste. —JabberWokky

2005-04-21 01:46:32   I propose that we define a "Statue Attractiveness Scale" to objectively quantify the attractiveness of statues. As a reference point, I recommend the Prince Albert Memorial in Kensington Gardens (London) as absolute zero. —BarnabasTruman

2005-04-21 15:58:53   Hmm.. rounded bottom, no arms, and rotund legs. Wait a minute, its a Dalek in disguise! Run your your lives (or at least to a staircase). The statue is so weird. Save-Mart doesn't even sell whole lobsters. And how often do people buy leeks? —CraigBrozinsky

2005-12-05 08:34:31   My vote for ugliest statue/sculpture would have to go to the "Skeletal Orc" sculpture on the Davis Commons (picture provided on that page). —AlexPomeranz

2005-12-05 22:32:39   The head gets knocked off ever so often when the highschool tornado comes through around lunch time. —AubreyJohnson

2005-12-07 11:56:15   I am glad I am not the only person to find this excuse for art hideous. The angular shapes hideously topping a messy cone base, in combination with nasty colors make for a hideous, hideous eyesore... —MatthewTom

2005-12-07 22:43:42   I think it's pretty. I like bread alot. I also like lobster with butter sauce. I don't like eggs very much but this statue is beautifully done. The unique granite composition, hand shaves precision, it's a spiritual aroma, a metyphysical gift to man. —JoeSmith

2005-12-12 18:46:27   I wish there was a voting engine which tally whether or not people really feel this IS the ugliest statute. (It probably is. Although there are several others which give it 'some' competition.) —JaimeRaba

2007-10-05 17:16:27   The statue speaks to me. It says, "We should be tranced-out mindlessly-happy skirt-wearing crotch-framing housewife consumers who love to buy the products that someone who wants our money has laid out in front of us in an effort to implant the grocery product meme into our minds and cause sheeplike buying behavior." —RonB

2008-04-30 16:53:43   I'm fairly certain that those cover things are for lighting, so as to prevent night from bringing sweet relief from the sight of this statue. However, I've never seen the lights turned on, so I must assume that they burnt out and nobody is sadistic enough to replace them. —JoePomidor

2008-05-01 14:52:54   That the piece arouses so much emotion well validates its existence. Ugliness is not necessarily bad and art need not be pretty. —BrianAng

2008-07-26 10:42:30   One of these days you will find this thing wearing a hat or mask...and you will know then that it was I who covered its horrorific glare. -SunjeetBaadkar —SunjeetBaadkar

2012-12-27 17:35:54   I feel as though the monstrosity outside of the Natsoulas gallery is giving this thing some serious competition for the title. —Th3DrD0nn4