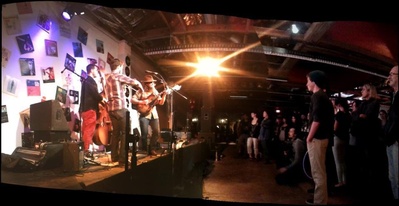 Playing at the old Dimple Records space in 2013. Photo by Rusi Gustafson

The West Nile Ramblers play western garage and country noir, a crunchy combination of western swing, gypsy folk, rock & roll, and jazz that inspires people to cut loose and have a good time. Alex Roth and Andy Lentz bring their decade-long history of musical collaboration to bear in fronting the band and captivating the crowd. Their infectious energy brought them to the stage opening for Paul Brady as winners of the 2012 Ballyshannon Folk Festival band contest in Ireland and has kept them returning to Davis Music Fest as one of the most popular acts of the festival.

Their release Western Garage & Country Noir is an homage to the vinyl era that features an a-side of electrified studio recordings and a b-side of bluegrass-style live tracks taped at a rustic cabin in Lake Tahoe. Strains of country, traditional, folk and funk are expertly handled in the songwriting and musicianship of Roth and Lentz and by their stellar cast of accompanying players including Bart van der Zeeuw (formerly of K's Choice), Katie Weed of Old Man Markley, and Cooper McBean of The Devil Makes Three.

They have been known to bicycle to their gigs with all their gear. Gotta give them some credit for that.