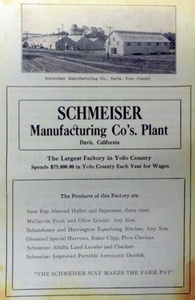 A Schmeiser Manufacturing Co. adTheodore "TG" G. Schmeiser (Aug. 26, 1872-Feb. 12, 1950) was a Davis pioneer and inventor who built the Colonial Revival home with Queen Anne features at 334 I Street in 1911. The home is one of Davis's many historic places, all weaving the fabric of town history, as can be viewed on the Davis timeline.

Schmeiser was born to Gotfried Schmeiser (1835-1901) and Sophia Oeste (1841-1919) on the family ranch just west of Davisville. One of eight children born on the Schmeiser ranch, TG and five of his siblings were educated at the Fairfield School and became prominent citizens.

2015 Google street view image of Schmeiser House at 334 I St. in DavisBy the age of 28, TG had established the Schmeiser Manufacturing Company next to the railroad tracks; there he manufactured farm implements as well as invented and improved some widely-used agricultural mechanisms. In 1910 he organized the town's first water company and became a charter member of the Davisville Almond Growers Association.

TG married Chloe LaNette Klays (March 13, 1879-February 1967), daughter of pioneers Frederick and Chloe Collins Klays, and together had one daughter, Chloe Bernice Schmeiser (b. March 26, 1909). TG and his wife were active in community affairs from 1900-1925; after 1925, when the manufacturing plant was moved to Fresno, the Schmeisers divorced and Mrs. Schmeiser remained in Davis. TG later married Lella Cullingford (June 16, 1878-June 18, 1949) of Fresno.