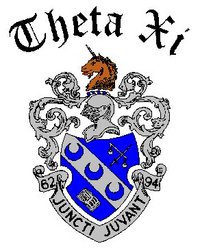 The Coat of Arms

The Purpose of Theta Xi is provide a college home environment for its active members in which fellowship and alumni guidance lead to wholesome mental, moral, physical, and spiritual growth. 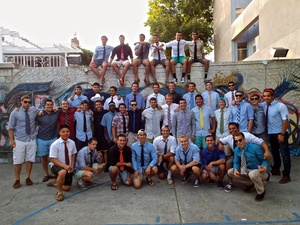 With that said, Theta Xi (ΘΞ) was the first social fraternity at UC Davis. The local chapter, Beta Epsilon, has initiated exactly 1254 members as of March 2016, with another associate member class scheduled to cross before the end of Spring quarter. As of now, Theta Xi has 60 active members, drawing from a large variety of majors, nationalities and beliefs.

The chapter owns all three houses on 1st Street between D Street and E Street. Since the fraternity owns its houses outright with no mortgage, it reduces membership dues while increasing the budget for activities, including philanthropy, social events, and brother bonding activities.

On top of having the most active social calendar, Theta Xi has been extremely active on campus. Theta Xi brothers received 2nd, 4th, and 5th overall at the 2015 Kappa Dash. They were also the 2012 Greek Week Champions with Kappa Kappa Gamma, won Alpha Phi's King of Hearts in 2016, 2013, & 2012 and were the 2006 Greek Week Champions with Delta Gamma. Members consistently find themselves in leadership positions at UC Davis such as in ASUCD and the California Aggie.

Theta Xi has a heart: the chapter has an annual fund raising event for Habitat for Humanity. Additionally, the fraternity has thrown two philanthropy concerts starring Andre Nickatina. 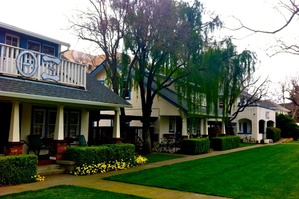 A whole block with three houses conveniently located downtown and only three blocks from campus! 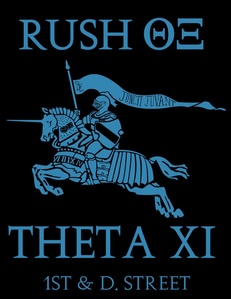 "Like" them on Facebook to stay up-to-date with their most recent rush events, philanthropies, and other events!

This year, Beta Epsilon held its 2nd annual "Habit for Gingerbread-manity" fundraiser! The brothers enjoyed a fantastic turnout and company from scores of groups representing the UC Davis community. Eleven groups, representing the Greek community and the greater Davis student body, added to the festivities to contribute to Habitat for Humanity. 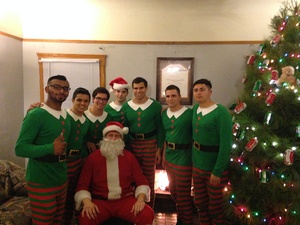 The Associate Members in the spirit of the holidays 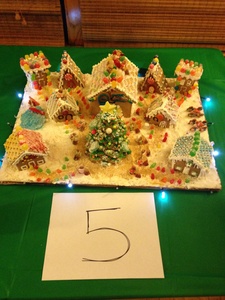 Some of the Organizations Theta Xi members have been a part of... 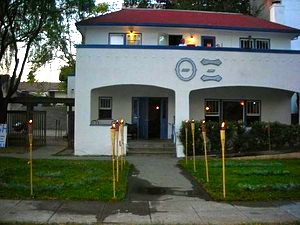 The Main House aka TX

Theta Xi is a Frat, they have been in town for a while near what was the borders complex. They have throw some wicked house shows. Theta Xi has had Mac Dre and other local rappers such as Andre Nickatina performing at theta xi before, it just sounds like they dropped the ball hardcore on this go around, I for one look forward to hearing about how this situation resolves. E-40 is from Vallejo and is rather local, he's just had some minor mainstream exposure, as far as being able to come perform it's doable. Most entertainers (lolundergroundrappers) charge the frat ~ $5000 in goods and services to come perform. Some people do savage shows, others come shady lipsynch and bounce. Daubert Back when I was a new Davis resident (circle 1998-1999), they had some parties that were a bit too wild. I remember one I went to where some of the members were on the roof and threw an empty keg onto some guys head... Shortly after I left, I had heard that a riot broke out, and various party goers decided to fight the frat members due to their unsafe practices. It was a huge riot from what I was told. I had also heard a year later about another party ending when one guy bit another guys arm... - Paul Amnuaypayoat

Why would it matter what happened in 1998. That was seven years ago. Thanks for the insight. But if your are going to offer something at least make it apply to the people that are members of the fraternity now. That is just saying something to say it. Besides the person who threw that keg was not a member of Theta Xi so I would appreciate if you would retract that cause you dont know the person who threw it. Oh the person that bit the person's ear off was a phi delt and he was at fault. It had nothing to do with anything a member of Theta Xi did. I really hate when people just say stuff they no nothing about. That is not very fair to the people it effects. But it seems to happen a lot on this site.—DustinDevan

History is relevant on this website — but don't hold it against current members! —BrentLaabs

2006-07-17 22:49:06 There were absolutely no connections to narcotics. There was no meth lab in the basement as some rumors claimed. Anyone who is skeptical and go the Davis Police Department themselves and view the actual police report. —BenGolomb

2007-05-17 01:31:28 A picture of a cop with an assault rifle crouching in front of Theta Xi surfaced on the internet last year, possibly a result of that alleged raid. It was on the Davis LJ, and if I could find it I'd link to it, largely because the cop was crouched behind ridiculously little cover, as if he were a cartoon character. —ThomasGray

2009-04-22 10:40:50 Theta Xi cancelled an E-40 concert that was going to be on Sat. April 25 and is refusing to give refunds. They also removed the entire event from facebook so you can't get in contact with them. If anyone knows any more information on this please let me know! —Selby

On Saturday, April 11, I purchased two tickets through ticket-selling website EventBrite for an event hosted by Theta Xi Fraternity at 515 1st Street, Davis, CA. Theta Xi billed the event as "E-40 Live at Theta Xi" with part of the proceeds benefitting Habitat For Humanity and the Breast Cancer Foundation. However, less than a week before the event was to take place on Saturday, April 25, Theta Xi announced the cancellation of the event through Facebook.com with no reason stated. I immediately suspected fraud on the part of the Fraternity, luring paying customers into a scam promising big headliners and charitable proceeds.

The Facebook contact for the event, Jeffrey List ([email protected]) said that the Fraternity would be handling all refunds. However, my attempts to email and call members of the Fraternity were futile, with phones being disconnected (530-758-6294) and emails unreturned. I contacted EventBrite, whose staff informed me that refunds had been initiated but the sole refund power rested with the Fraternity. EventBrite also informed me that they alerted PayPal to the incident and had the Fraternity's PayPal account frozen so they could not withdraw any more of the money collected from at least 500 hopeful concertgoers. EventBrite called the handling of peoples' funds by the Fraternity "irresponsible" because they were attempting to steal the money and they never intended to issue any refunds. I also contacted the National Headquarters for the Fraternity, which keeps track of all Fraternity events, even on the local level. Jim Vrendenburgh ([email protected] or 800-783-6294, ext 104), the Executive Director for Theta Xi Fraternity & Foundation, responded to my email stating that he would try to investigate the situation on April 23. I have had no response since that date. I still have not received a refund either. I'm not convinced that this event was ever going to take place and I want the fradulent practices of this organization exposed. No one at the Fraternity will accept responsibility for stealing thousands of dollars from hundreds of unsuspecting consumers.

According to the entry text above, they have an an annual events for Habitat for Humanity, so the event isn't overly suspicious. It's more likely that might just be caught up with the massive amount of paperwork needed for such a last minute cancel. And they dropped the ball in taking charge to fix it (trying to give them the benefit of the doubt, as it'd be really stupid to intentionally try to hold on to the money...). I'd recommend contacting the Interfraternity Council at UCD, so that at least there's some local looking into it at the campus level. Good luck to you and everyone else!

Theta Xi has had Mac Dre and other local rappers such as Andre Nickatina performing at theta xi before, it just sounds like they dropped the ball hardcore on this go around, I for one look forward to hearing about how this situation resolves. E-40 is from Vallejo and is rather local, he's just had some minor mainstream exposure, as far as being able to come perform it's doable. Most entertainers (lolundergroundrappers) charge the frat ~ $5000 in goods and services to come perform. Some people do savage shows, others come shady lipsynch and bounce. —StevenDaubert

2009-04-27 16:44:57 you all keep blaming theta xi and saying theta xi got the money, but if you look at your receipts, it's not theta xi that got the money. it's jeffrey list. he was in charge of the event and the money, and he is not a member of theta xi. he is the one stealing your money and not giving refunds. he kept all the money and tried to say that theta xi was responsible even though they are not because they never got any money. so blame it on jeffrey list. —yourmom12

Was this a Theta Xi event though? Who is Jeffrey List and what relation does he have to Theta Xi?

Jeffrey List is a concert promoter that requested Theta Xi as a venue to host the E-40 concert. Theta Xi was just a venue and never actually saw any money from the concert except for the tickets sold on Theta Xi property. The tickets we personally sold were refunded immediately. The tickets purchased on the web were not handled by any Theta Xi members, they were all handled by Jeffrey List.

That was an editorial on May 5th about Theta Xi should have done more, not been so silent, etc. On the 15th, [WWW]an article with more information came out. This is a followup to the 4-30 article linked above, by the same author.