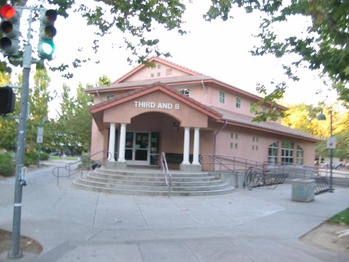 The Teen Center is now the US Bicycling Hall of Fame.

The Teen Center ended teen services on August 31, 2009. For City information on Teen Programming, follow this link : http://cityofdavis.org/cs/teens/index.cfm and What Became of the Davis Teen Center

A drop-in center, that has a pool table, a TV with an X-box, Arcades, etc. for Davis non-college-student teenagers. Sometimes they throw dances for the kids, and there's a basketball hoop out back. College students are ushered out summarily.

I'd assume that there are some volunteer opportunities but i haven't looked into it.

There is also a public internet terminal for the teens to use.

In 2005 Watermelon Music, with help from many of manufacturers, donated over $5,000 worth of musical instruments and gear to 3rd & B to be used by young area musicians. The gear includes Fender and Ibanez electric guitars, Kustom, Fender and SWR amplifiers, and a complete Pearl drumset with Sabian cymbals. Parents should be aware that 3rd & B offers supervised (but unintrusive) time for everyone on these instruments during most of their open hours. If you are a teenage musician looking for a place to play, and new people to play music with this summer, check it out

During the 1990's the Teen Center allowed the basement to be used as a venue, which became popular with many northern California bands. For example, Green Day played several shows at the Teen Center before becoming big. Security concerns caused the venue to be shut down indefinitely. 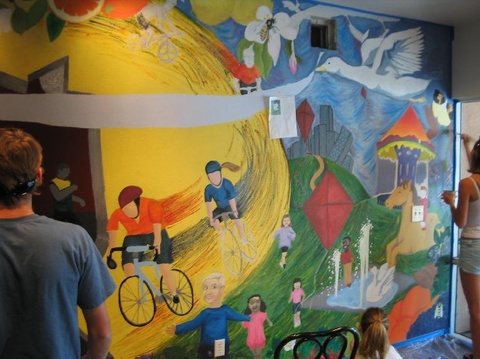 Mural painting being done inside front door - unfortunately was painted over when Teen Center Closed. Could have been kept since it fits bicycling.

I've been told that Thrid and B used to be the place for shows in the area until they cracked down on all the drunk people showing up to the shows. I guess having a bunch of alcohol sort of defeats the purpose of a teen center. — ArlenAbraham

Yep, the basement use to be the place to see the coolest, local death metal, punk and occasional hip-hop show. The accoustics were great, but yeah people showed up drunk. Which again proves, sober venues are not possible. —JimSchwab

Isn't this where Davis is Burning, the annual drag show takes place? That doesn't seem to teen friendly, so maybe I am wrong. -AbbyLawson

Davis is Burning takes place at the Veterans Memorial Theater. A drag show is a lot less sexualized then say, homecoming or prom - which are very well accepted. I'm not saying it's your view - but I don't see how exposing teenagers to people of alternate sexualities having fun is bad. —ChristopherMckenzie

They had Davis is Burning here my freshmen year, if I recall correctly. —PhilipNeustrom

I attended a KDVS record swap at Third and B before and it was great. You can't tell from the photo but the space for events is in the basement. Steps lead down to it from the outside. It would be great if they allowed shows there again since the basement is obviously designed for them. —RiotInDavis

"I have received news that the center has gotten permission to resume shows!" —TobinJones

StevenDaubert was part of a signature drive a couple years ago to stop the city from slashing the teen center hours, or even closing it. They had a PS2, and some hard DDR pads and used to have DDR nights at least last year. Daub remembers when the teen center was brand new, but he wasn't of teen age so he couldn't go for a couple years.

"This is apparently where Green Day did their first out-of-town show! No joke!" —TSaito

Is anyone old enough to pull together a listing of shows that happened here? I just came across a rather pro looking flyer for Sleater-Kinney playing here and was intrigued— CraigFergus

2009-11-21 20:02:27   it's so sad that this place is closing. i can't believe lamar heystek is the only one that thought the bike museum could be moved to another location. had more people known about what was happening, i believe the situation would not have ended like this. the davis vanguard has a good article on the situation: http://davisvanguard.org/index.php?option=com_content&view=article&id=2934:what-became-of-the-davis-teen-center&catid=58:budgetfiscal&Itemid=79 —JessicaRockwell

2011-08-04 17:00:59   Back when I was in Jr. High in Davis, they actually came around and asked us kids if we wanted a place like this... sounded great. Free pool, ping pong, video games, etc. What's not to like? Then it opened, and it quickly became known as THE dork hang out. You were loathed for showing up here, it was the definitive place for the un-cool crowd. They tried changing the name to "3rd and B" to get away from the campy sounding "Teen Center", but by the time they started having shows and events that kids wanted to go to, it was too late. It's really too bad... the place was really nice inside, and had a lot to offer (I led Rainbow Summer kids on field trips here). I think if it had been marketed and organized correctly from the start, it could have been a great place for the tween (probably more than teen) crowd. Guess it just wasn't meant to be. —OldDavis73