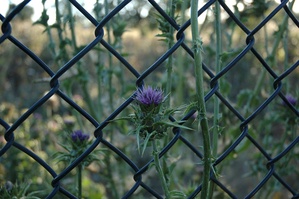 A milkethistle inflorescence sticking through a fence in South Davis.

Thistles (Cirsium spp. and several other genera) are annuals and herbaceous perennials/biennials in the aster family (Asteraceae) that can grow up to four-feet or more in full sun. Some are native, and many have economic importance, either as crops or weeds. Much beloved by the Scots, they are typically recognized by their flowerheads, which can be purple, rose, yellow, or white, and their sharp spiny stems and hairy leaves. In some places, thistles are actually a protected species!

Thistles begin to bloom locally in spring, and persist throughout the hot summer months. They can spread by rhizome or seeds which are attached to the tufted flower — this plant self-seeds freely! As with most in the Aster family (incl. dandelions), the seeds are borne on a white fuzzy 'pappus' that helps them float away to find new places to grow. The seeds are surprisingly large for floating on the breeze! Thistles have a deep root system which makes them extremely drought tolerant. The thistle is the national flower of Scotland and appears in many Scottish symbols—supposedly the Scots used thistles in war against invaders by scattering them on the ground. Despite driving away humans and deer, thistle attracts bees, butterflies and birds. Some of our local thistles are described below. Take a look at our Town Flora to see what else grows in Davis.

Yellow Starthistle (Centaurea solstitialis L.) is an invasive species whose thorns will find their way through most clothing if you dare to walk through an area where it is growing. Not a true thistle (but also in the Aster family), it has its thorns on the flower instead of the leaves. For all its faults, however, beekeepers prize yellow starthistle because it does make an excellent honey. You can find it at Pedrick Produce. It tends to be a bit smoother and less coarse than common clover honey, and is excellent for mixing into drinks like tea because it stirs more easily and doesn't dominate the bottom of the cup. Find in depth information about yellow starthistle at the UC Davis Weed Research & Information Center as well as UC Integrated Pest Management.

I grew up in Nevada City, a little rural town about 75 miles northeast of Davis. We have lots of star thistle, and it SUCKS! Frequently, when the star thistle gets too out of hand, it's set on fire and burned away because digging it up or mowing it down is too painful. — SummerSong

If you find a tall, slender thistle with green flanges up and down the flowering stem, it is probably this species, Carduus pycnocephalus. The flowers are light purple, but are not as large as the others. Spines nearly coming from stems, where most other thistles listed here have them all on large leaves. May have some white in leaves, but not as much as milk thistle.

Also commonly called cardoon, this is the same species (Cynara cardunculus) as the edible artichoke, but having escaped cultivation it has reverted to a more wild form. It often has a grey-green appearance to the large leaves, which can be very complex in shape with lots of 'fingers'. You might find some growing in the Student Farm to see what they look like. If you drive I-80 into San Francisco, you can also see big clumps of them on the hills to the right (north) side of the road.

The word Cirsium is derived from the Greek kirsos meaning "swollen vein", reflective of the plants one-time use as a remedy for swollen veins. Several of the thistles, in fact, have been used for medicinal purposes. Milk thistle preparations are widely available as "dietary supplements" and extracts are being studied to see if they have actual medicinal value. The name Milk Thistle comes from the milk white lines on the leaves of the plant. It is actually called "blessed milk thistle" in some places from a claim that the milk of Jesus's mother, the Blessed Virgin Mary, spilled onto the leaves and created the white lines... 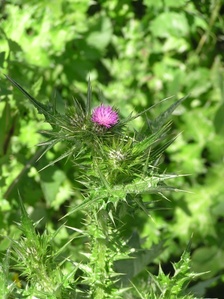 Italian Thistle. Photo taken on 3/28/05—so there are many more flowers to follow in this season. 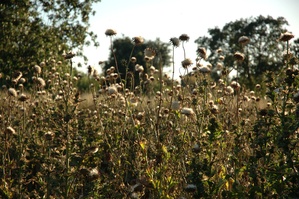 Milk or bull thistle with seeds.

Yellow Thistle was a bane to me when I would go out and bike ride near blue max when I was younger! —StevenDaubert