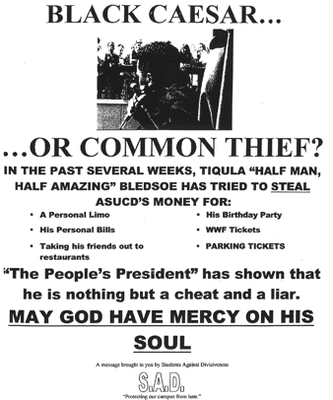 A flyer circulated in 2002, from the LEAD hate gallery

From Spring 2001 to Winter 2002 Tiqula Bledsoe was the ASUCD President and ran as a member of the LEAD slate. Before he was president, he was an ASUCD senator.

The election that lead to him taking office was even more dramatic than usual for the time. Opponents got his slate disqualified for violating election codes in their campaign, such as spending too much money and posting large fliers. However, after playing the race card (including Bledsoe or a supporter posting fake KKK fliers on campus), the ASUCD Court reversed their decision amidst massive pressure from various ethnic minority groups on campus.

Tiqula Bledsoe however received praise from the Yolo County supervisors and State Assemblywoman Lois Wolk in a resolution signed on March 16, 2002. As ASUCD President, Bledsoe opposed the Pledge Bill of 2001.

As an ordained minister in the Church of God and Christ, Bledsoe was also routinely called "Reverend Tiqula Bledsoe," and jokingly referred to himself by numerous additional ego maniacal nicknames, such as "the Mohamed Ali of ASUCD," and even "half man, half amazing."

He left the office of ASUCD President with an unusually high debt in his allocated budget, causing ASUCD to have to do some juggling to survive the rest of the fiscal year. It also came to light after he left office that he had attempted to use ASUCD funds for his personal limo to the "President's Ball" (putting on a ball isn't exactly a normal ASUCD activity either, and in this case it ran a huge debt whereas it was supposed to break even), and to pay for parking tickets he'd incurred in the state capitol, among other things. Mark Champagne prevented this money from actually being spent — fortunately for all students who are not Tiqula Bledsoe.

His given name is pronounced tai-KYU-la, if anyone was wondering.