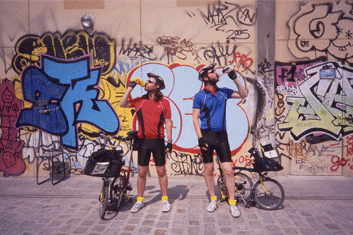 To the north, to the east, to south, to the west, to the hills, to the bar, to the century! For 30 days Gregg Whelan and Gary Winters of Lone Twin will take a daily six-hour bike ride through Davis and the surrounding area. In honor of the UC Davis' Centennial and in an attempt to document the life and times of the city and the university, the intrepid pair will present a nightly dispatch detailing the day’s events. They’ll share stories of a city at work, a city at play, stories of the brave and the humble, stories of sore legs, tired eyes and the puncture repair kit.

A new five-minute installment will be added to the show each evening; visit and revisit as this marathon event accumulates and help the pair raise a thousand toasts to Davis.

“A wonderful body of work.” —The Guardian, UK Formed in 1997 by Gregg Whelan and Gary Winters, Lone Twin are widely recognised as one of the UK’s foremost producers of contemporary theatre and performance. Across the world the company’s work is met with critical and popular acclaim as a truly international audience enjoy an ever-diverse range of works for stage, studio, and public space.

See Daily Video Updates, on YouTube, or read their blog.