Following is the Toad Hollow Dog Park Master Plan as adopted by the City of Davis Recreation & Park Commission on September 21, 2006. This information was distributed as part of the agenda at the public commission meeting held on that date.

Many thanks must go to both Pat Riley of the City of Davis Recreation & Parks division for coordinating this effort and researching logistics, as well as Bob Cordrey who patiently facilitated the community meetings, contributed his expertise in park design, drafted the plans, researched additional information and presented the plans to the Recreation & Park Commission.

The Toad Hollow/Core Pond Dog Park Masterplan process has been predicated upon survey results, city staff comments and two publicly noticed masterplan workshops. Based upon this input, and expecially the public inolvement during the two working meetings held on July 6 & 20, the amenities and design of this Masterplan are being forwarded to the city for approval. 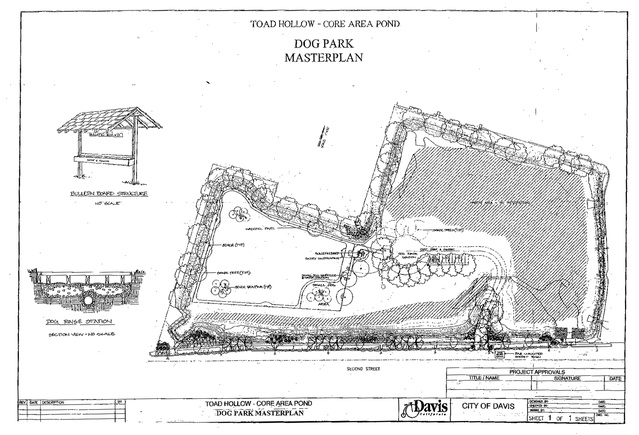 The primary features that were incorporated into the Masterplan design, based upon the needs and wishes of dog owners, are briefly described below in no particular order:

Cost estimates for the various amenities listed above are provided in this section. Since construction drawing and project specifications have as yet to be developed, this cost analysis is based upon general city and industry standards. Limited funding will most likely result in staged implementation, therefore the various amenities have been estimated individually and in no particular order.