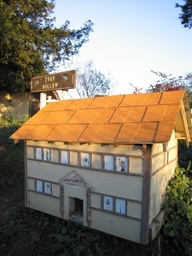 The entrance of the toad tunnel, starting at the post office parking lot. 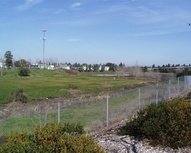 The Toad Tunnel is a six-inch diameter pipe which runs under the Pole Line Road overpass that bridges I-80. Despite the name, this is also for frogs, not just toads. Its purpose was to allow these creatures to travel from the area where they lived to Core Area Pond (AKA Toad Hollow) at the other end.

Because of the building of the overpass, animal lovers including Julie Partansky worried about toads being smooshed by cars, because before the overpass, a colony of toads hopped from one side of a dirt lot (which the overpass replaced) to the reservoir at the other end. There was a lot of controversy, and the town decided, as part of the $7 million financing for the project, to allocate funds to build a toad tunnel beneath the Pole Line Road overpass. Wikipedia reports that the tunnel cost $14,000, while the book Northern California Curiosities reports $12,000. The book Weird California claims it was $30,000.

There are also several tunnels rather than just one. The shortest run is in the street opposite Sudwerk's parking lot (linking 2nd to Pole Line - a very very non-obvious route). It does, however, lack any sort of decoration, so it helps if you visit Toad Hollow to get an idea of what you're looking for. All the tunnels terminate at a fenced, protected wetland area with foreboding signs implying that if you climb over the fence, you will cause hundreds of species to die and make Gaia weep.

When the tunnel was built there was less development east of Pole Line Road, so the area that is now Families First was largely open and undeveloped. Therefore, the location was not chosen because the Post Office parking lot was the happening toad place to be.

Several years ago The Daily Show did a story about Davis' infamous toad tunnels. They put up a camera to observe whether toads used the tunnel. None did during the period it was recording. This, of course, does not prove that they never use it. You can watch the Daily Show segment here

There has even been a children's book written called Toads of Davis.

Are toad tunnels really weird? There are plenty of tunnels to help wildlife cross the road in the UK - mostly for newts, but badgers, toads and hedgehogs are all catered for. Maybe they're just odd. The little housey thing is definitely odd. Why isn't it called "Toad Hall?" — Liam Creighton

I've heard that frogs/toads won't go through a tunnel if they can't see the end of it. Anyone know? —MichelleAccurso

If I were a frog, or a toad, I would expect any dark tunnel in the ground to have a snake at the bottom. No what they really needed was a Frog Overpass. Or possibly a Frog Mover conveyor. Or a transporter. Or, just improve the other side so they don't need to cross the road.—SteveDavison

"Hi, I'm a herpetologist (reptile/amphibian biologist), so perhaps I can answer some of these questions/concerns. Wildlife tunnels have been highly successful in other areas in preventing some roadkills. Not sure about this one. Frogs/toads don't need to see light at the end to use it - they often take refuge in dark burrows during cold and dry weather. It is unlikely, however, that a frog or toad would use an overpass - these are terrestrial animals, not arboreal, so they are much more likely to go down than up. And yes, snakes are also terrestrial, but that doesn't prevent frogs and toads from using other tunnels, burrows, etc. I doubt that metal grating would have an effect one way or another - cars passing overhead don't seem to deter them from crossing roads (unfortunately)." — MelissaAmarello

2015-07-04 13:46:47   I always think of the cluster of toad buildings near the Post Office as Toad Hollow (like the sign says). I think some people think of the dog park. —DavisHuntMaster