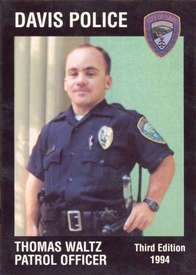 Lieutenant Thomas W. Waltz, badge number 51, is the investigations lieutenant for the Davis Police Department, where he has worked since at least 1994. He was also the Vice President of the Davis Police Officers' Association ( source), which gives an indication of the respect his fellow officers have for him. He used to be the watch commander.

He's a decorated police officer, and is known to many for his kind, helpful, and responsible service. He is also 4'11" tall. Waltz was mentioned in an article in Maxim Magazine on the Davis Police Department Trading Cards.

He has provided the training on behalf of the Police Department for the Community Emergency Response Team. He also worked at the 2005 Picnic Day.

2011-02-03 07:19:06   Saw the LT on tv online because Linda Wolf was one if my wife's bridesmaides...very composed and in control. I am willing to donate time money or both from my agency to Davis PD departments...someone should ping me [email protected] —JeremyBrandonBelk