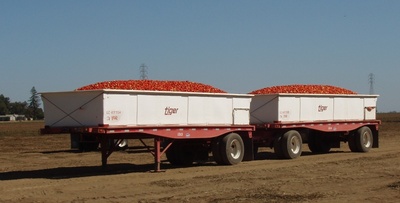 The huge white bins are filled to the brim with processing tomatoes. These are made into tomato sauce, tomato paste, ketchup, salsa, etc. Things that need tomatoes, but don't have to look pretty like the ones in the produce aisle of the grocery store. Canning tomatoes are small and have a thick skin to survive the harvesting and transporting process.

The tomatoes you see in the grocery store have a thinner, more tender skin. They are generally hand picked and boxed before transport since the automated harvesting techniques would crush and/or bruise the tomato.

California produces 90-95% of the processing tomatoes used in the United States. Yolo County is the second largest producer in the state. 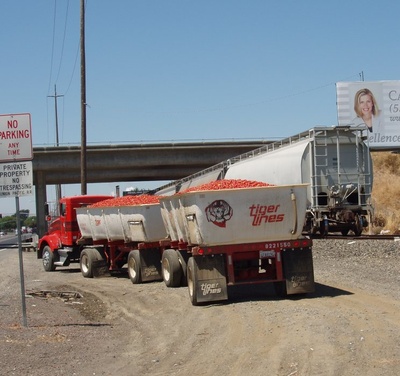 A fair number of the drivers locally are UCD students. During spring quarter, tomato hauling companies have placed ads in The California Aggie and had booths at the summer job fair. Many companies recruit and train UCD students heavily for several reasons.

What to expect if you do work 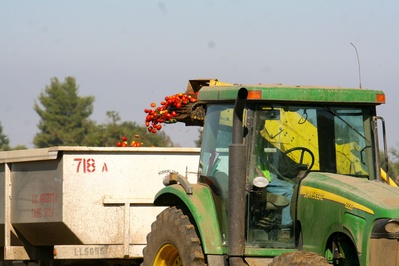 Why are there so many on the road? 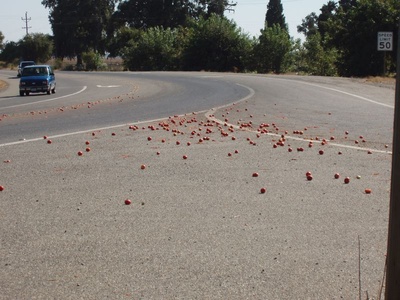 You can tell where every bump on a road is around here, because there is always a nice spread of tomatoes just past it where the fallen tomatoes have come to a halt.

So many people will ask why they are transported open top. The reasons are multiple.

Yes, a truck can be ticketed for dropping tomatoes, but the incidence rate is so low that it is calculated risk.

RogerClark worked as a driver and dispatcher for three summers.

SethNagao worked as a tomato truck driver for one summer and Mike Lowrie Trucking for two.

photo request: one of those white bins being filled alongside a harvester. Also, a close-up shot of the tomatoes.