Toomey Field is a football field located on campus right next to the Hickey Gym and across the street from the Social Sciences and Humanities Building. It is surrounded by the Woody Wilson Track.

Toomey Field was the original home of both Aggie football and lacrosse. With the new $30 million Multi Use Stadium opening in 2007, Toomey field will now be used only for track and field events. The new stadium was originally slated to open in 2006, but construction delays meant Toomey Field got to be the home of one last Aggie Football season in 2006. 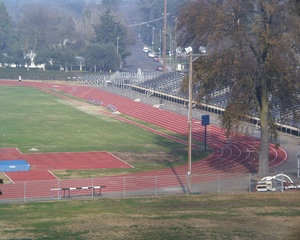