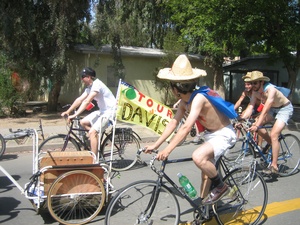 The Tour d' Davis is some sort of roaming bicycle awesomeness, described not so much as a race but a rolling party. Each "stop" had different challenges. Things that come to mind: waterballoon launches, mooning, slip & slides, chick races, bicycling with capes, BBQing, waterguns, bodypainting.