Tour de Cluck is an annual bicycle tour of Davis chicken coops organized as a fundraiser for Davis Farm to School, which supports local food in a healthy school environment. The fourth annual event will take place on Saturday, May 24, 2014.

The Tour de Cluck Kick-off begins at 9 a.m. at the Davis Farmer's Market, US Bicycling Hall of Fame and Central Park. A Courage to Cluck exhibition, a Fowl Food Fair and a chicken, bicycle and barnyard-themed Art Exhibit and Silent Auction give visitors good reason to linger awhile!

At 10:00am, those ready to head to the coops will gather around one of four pairs of Bicycle Guides which will disperse groups of riders to one of four "Coop Loops" (neighborhood-centered clusters of coops) in a bicycle parade. Coop owners and chicken experts will be at the coops to share their experiences and answer the questions of the chicken curious. While bikes are obviously strongly encouraged, car travelers are also welcome. A wonderful extra resource, "Chicken Skool" Workshops will address all your fowl questions!

The coops featured will be presented as a self-guided tour in neighborhood clusters (coop loops!) with most having easy access to Davis’s extensive network of bike paths and bike lanes. In addition to the egg-cellent Chicken Coop Crawl, The Tour de Cluck will once again celebrate our best local food purveyors at the tasty Fowl Food Fair at the renowned Davis Farmers Market.

Our Community Education series, "Chicken Skool", will feature, among other things, backyard poultry experts to inform your chicken decisions, from breed selection and feeding options to coop design and construction.

And of course, it’s never too early to begin practicing your cluck, bawk and cockle-doodle-do for the not-to-be-missed Community Kick-off Clucking Exhibition held on the U.S. Bicycling Hall of Fame “back porch”. We suggest you begin to form your flock now!

To learn more, become an egg-steemed sponsor, volunteer on the "Cluckster" event team (it's fun!), submit silent auction items and more fowl details, visit our website at http://www.tourdecluck.org or contact us at [email protected]

2014 Tickets are currently on sale now at http://www.brownpapertickets.com/event/581755 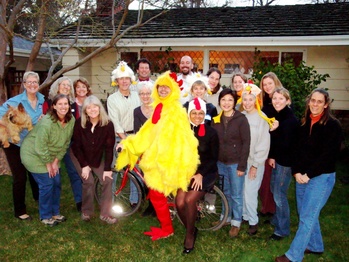 The organizing force behind the 2010 event: Team Cluckster. 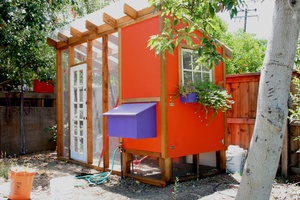 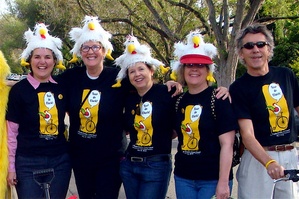 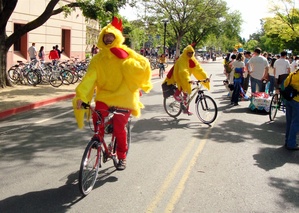 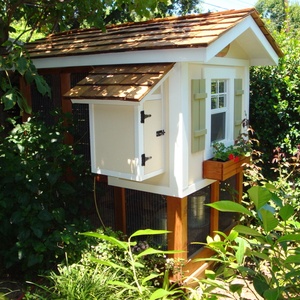 The Clemens Coop in Neo-Craftsman/California Bungalow 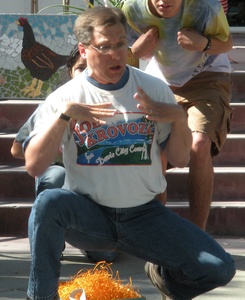 Mayor Joe Krovoza gets down in the Courage to Cluck exhibition in 2010. 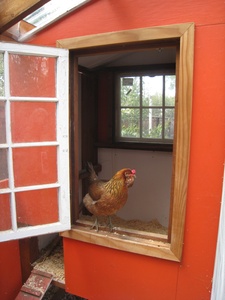 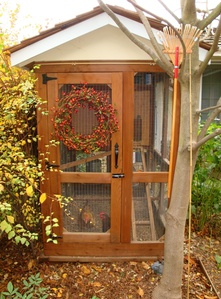 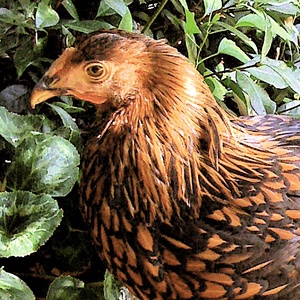 A portrait of Gertie.

2010-05 - Dagon Jones is sad he did not hear about this event sooner so he could show off his backyard coop he made from 100% recycled materials.

2011-03-08 11:20:33   Are there any sanitation/safety precautions taken in going from coop to coop? In all seriousness, it's entirely possible that this could spread disease. —TomGarberson