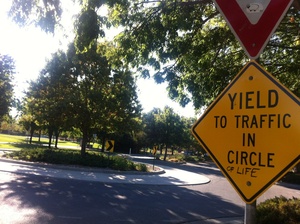 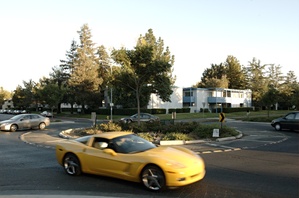 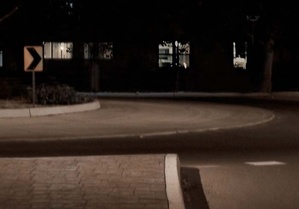 Fifth Street by the Police Station

The People's Republic of Davis and the University, in an attempt to become even more European, have installed a few traffic circles in various locations. Despite the presence of many bike circles on campus, the idea of traffic circles was initially met with limited enthusiasm, presumably because so many students have memories of horrible bicycle accidents and right-of-way mishaps on the first day of school. In practice, the circles have worked out fairly well, largely owing to the fact that they are all one lane wide (unlike in Europe, where they are sometimes two or three lanes wide — imagine American drivers trying to figure those out). If you have trouble, just remember that the traffic in the circle has the right-of-way.

Proponents of the circles note that they eliminate the need to stop at intersections with no cross-traffic.

Traffic circles are becoming more common in the U.S. as the practice of Traffic Calming becomes more prevalent. The ones in Davis are more technically called "roundabouts." Interestingly, a thorough linguistic survey suggests "traffic-circle" to be the preferred term in North America, with Californians being split down the middle in their usage, except in Northern California, where the term roundabout seems more prevalent. It is unclear whether this is due to linguistic preference, or to accuracy in naming. The term "rotary" is the preferred term in much of New England. In Southern California (home of the "the" prefix on highway names), the traffic circle is frequently known by the Spanish name of "glorieta". Less commonly used names include "euro-loops" and "car cyclotrons." 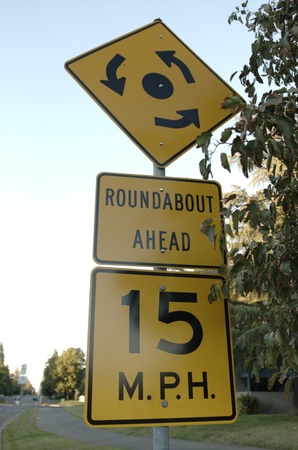 To celebrate/mock the installation of the traffic circle at the intersection of Anderson Road @ Alvarado Avenue, someone taped together a bunch of cardboard boxes in the shape of a clock tower.