The Train Station is also known as the Amtrak Station. It is officially called the Southern Pacific (or SP) Depot, the name of the original Davis train station. The original station was built in 1868 and stood where Our House is today. The current station was constructed in 1913 and is a historic landmark. Currently operated by Amtrak, it uses the Union Pacific Railroad. The station is located downtown at 840 2nd Street , next to that fork monument thing called Solar Intersections. It is also home to a piece of town art descriptively known as the Straw Bale Bench — go have a sit. The surrounding landscape and renovations were designed by Indigo Architects and a philosophy statement and early photos are featured on their web page. It also features the Davis Tower, which is, fittingly, only two stories tall, and the A.G. Brinley Plaza, named for a former station agent. The station, parking lot and tower are in the middle of the Davis wye of train tracks connecting to the north, but the segment on the downtown side of the station is mostly unused by trains.

Official information on the station can be found on the "Great American Stations" website, and on the "Amtrak California" website. For booking/train info, see Amtrak. Looking for a phone to use at the train station? Try Downtown Phone 1 for a good time!

The train station is a good place for rail fans to hang out.

In Dec 2007, plans were in place to add about 30 parking spaces to the area. This will result in the loss of some attractive landscaping. Plans are also in place to add some bicycle parking—on a recent weekend there were 260 bikes parked at the station and only 150 official bike racks.

The station at night

Matt Buga standing on the platform at night 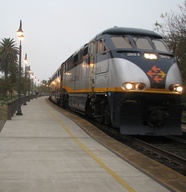 The Amtrak Capitol Corridor pulling out headed to the Bay Area.

If the Union Pacific ever vacates the tower, it would make a great place for a coffee shop—view to the west. 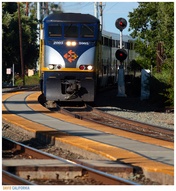 A Capital Corridor Amtrak train is pulling in the Davis Station.

Pulling in relatively fast for the size of the train at approximately 30mph, came to a complete stop within 5 seconds.

A Capital Corridor Amtrak train is departing from the station, heading southwest.

2011-07-31 14:58:53   The city council better not make Davis a quiet zone. First, there are often people who carelessly walk near the railroad tracks when the train is 200 feet away, and need to be honked at in order to move. Secondly, railfans like me would like to be able to enjoy our hobby. It is not the same if we don't get to hear the train horns blowing at all.

Train horns sound so much better than loud music played by party animals. If any of them beg for a quiet zone, I would only blow the horn louder, lol! —Chelsea744

2011-08-26 22:02:07   The original train station was located where the rose garden is currently located. The freight sheds were located where "Our House" Restaurant is now located. —JohnThomasMurphyIII