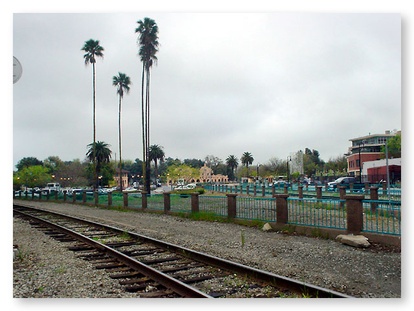 Train tracks cut a wye through Davis, with the wye's intersection being near the train station at 2nd and H Street. In fact, H street runs adjacent to the tracks behind ACE Hardware (aka Davis Lumber). All tracks are owned by Union Pacific, but two other rail companies use them. The California Northern Railroad Company has trackage rights to the small yard of three additional tracks adjacent to the mainline dual tracks to the east, as well as south to another of its lines at Suisun city.

In the past, the wye was often referred to as "the Y" in writing. There was once a baseball diamond located within the boundaries of the Y, and in the late 1800s, it served as the playing field for the Davisville Oletas. The Y became a very popular summertime spot for locals to gather and root for their home team. A great deal of gambling also took place, with spectators betting not only on their favorite team, but also on the outcome of each play.

Today, pedestrians often cross illegally at L Street over to Olive Drive and J Street over to the Amtrak Station. They cross from Olive Drive to downtown at several points, but especially out the back gates of Slatter's Court and at the end of Hickory Lane. The Hickory Lane route is the main route of students from apartments on Olive Drive to Downtown, including on Thursday nights when they often cross the double main tracks highly intoxicated. This is a tragedy waiting to happen, perhaps several, until the City figures out a way to pay for a separated grade crossing here. Much to the dismay of townies, these crossings result in fatalities with some frequency. (Note: in checking the Tragic Events section, several fatalities on the tracks are not yet listed.) A California Aggie article quotes a figure of 7 people killed in one year. (I found this article in my archive, and it doesn't mention such a number. I know of no year in which seven people were killed in or near Davis; however, it may be accurate for one particular year in Yolo County.—AlanMiller)

The main line comes in from the southwest (more or less following I 80) and curves to straight east out of town and over a raised train bridge and series of bridges paralleling the Yolo Causeway to the north, into Sacramento and beyond. The section of track across the Yolo Causeway was recently relaid with double track after several years without, because predecessor Southern Pacific pulled one track out. Both passenger and freight (which, puzzlingly, has the right of way) [how is that a puzzle to you? Freight makes Murica run Daubert]) share these tracks.

One may often find people Railfanning near train tracks. Feel free to join in!

According to TarZxf, "Most of the crossings in Davis are not at grade; exception being the lightly-used spur line to the north".

Locomotives blow horns in advance of all railroad crossings. That's to let cars and pedestrians know they are coming. The locomotive engineer does this because, legally, he or she must. Many residents who live near such crossings don't like the sound. They complain that the horns blow at inconvenient times irritatingly or even life-disruptingly. Davis is a quiet town, populated by folk who like their quiet—several years ago a woman was cited for snoring in her own apartment here. For instance, every train that passes Solano Park blows its horn several times on the way by, at all hours. Nonetheless several fatal encounters between residents and locomotives have occurred along this stretch of track. Other residents like the train horns. They say the sound is romantic and part of the quality of life in Davis, which is what living in a railroad town sounds like. Just as life in a Bay Area town includes fog horns in the soundtrack.

Dubbing the northward bound line as a "spur" is questionable1 with other people calling it a mainline. It once was the mainline, even for Amtrak, but now runs north to Richfield and is out of service to the former junction at Tehama, where the switch has been removed. Regardless of the proper terminology, the track itself heads northbound from the east-west line and travels along H Street out of Davis, eventually going 110.7 miles to Tehama just south of Red Bluff. Its leased from Union Pacific by the California Northern Railroad. This is the West Valley Subdivision of the California Northern and is used for moving freight in and out of Woodland and north to Corning and Richfield. Numerous Davisites consider that these tracks are the official border of Central and East Davis (as is reflected in general on the wiki).

This is where a number of the Homeless live in Davis. There are various pathways from Olive Drive and J Street through to the train tracks that are ways to get to the other side. 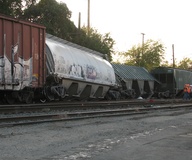 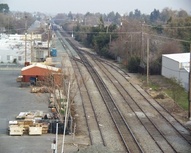 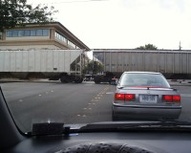 Eventually, you will find yourself waiting for a train 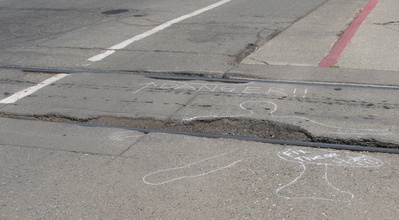 re: the horn blowing law

2010-09-01 07:48:42   The California Northern Railroad always blares its horn at the signaled crossing between 8th and H, starting as early as 6:30 AM. Anyone who thinks it's "romantic and part of the quality of life" should try living 50 feet from the tracks at a crossing. (And our landlord swore up and down that the train only comes once a day, in the afternoon, so as newcomers to Davis we weren't exactly well-informed in our decision to live this close to the train.) —zombiek

2010-11-20 00:54:01   What does one do if the track crossing bell keeps going off, and you're pretty sure it's malfunctioned? I live near the track crossing at H & 8th and the bell has been going off for longer than 20 minutes. Disregard this comment if the longest train in the world is crossing through our town... —AlvinTsao

2010-12-16 18:33:16   To AlvinTsao. There is a toll-free phone number on every silver utility box adjacent to all signaled crossings for reporting malfunctions. Unfortunately, and somewhat perplexingly, the crossing arms on the West Valley Line that crosses 3rd, 4th, 5th and 8th Streets, somewhat often malfunction, especially when it rains. Crossing arms are made to "fail safe", meaning unless every circuit indicates there is no train, the circuitry assumes there IS a train, and the gates go down. It sucks, but it is better than assuming there is NO train when there is. —AlanMiller

2011-08-23 12:03:10   Apparently there's finally going to be some action by the city on at-grade crossing: http://www.davisenterprise.com/local-news/city/city-applies-for-railroad-crossing-approvals/ —OldDavis73

1. Although it should be noted that Zxf's family knows a good deal about local lines

2015-04-14 03:23:37   Does the train run at night? I'm considering renting within a few short blocks from the track. I read through postings that it runs throughout the day including 630am, which is ok as an (un)natural Alarm clock. Thank you. —Normc