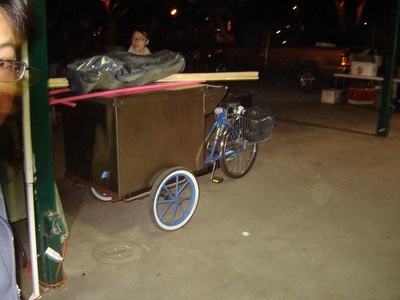 I just had to put this on the wiki somewhere

Tricycles have the advantage over bicycles in that they don't need to be balanced, which makes them ideal for elderly people who aren't able to balance yet can benefit greatly from the exercise and freedom. They are an alternative to bike trailers for hauling heavy and/or bulky cargo. Tricycles won't tip over when parked. Tricycles not built for cargo can hold three bags of groceries, which is no more capacity than a bicycle with baskets. If you are hauling cargo, get one with a parking brake. Bicycles have the advantage over tricycles of lighter weight, less air resistance, and ability to lean into corners all of which equate to greater speed. Bicycles can be brought on buses and parked more easily.

If you want to buy a new tricycle, brands that can be purchased in Davis include:

The Bike Barn, B&L Bike Shop, and Ken's Bike & Ski stock them, and Freewheeler can get the nicer Treks.

If you want one for cheap, Bike Forth sometimes has frames that you can build up.

There are basically two configurations of tricycles: those with two wheels in the front and one in back, and those with one wheel in front and two in back (three wheels inline are not called tricycles). Since the front wheel almost always does the steering (it doesn't have to: fork lifts, specialized cars, and boats rear-steer), having one wheel in front is simpler (thus cheaper and more common). Having two wheels in front becomes a greater advantage for more powerful vehicles, since the braking force is on two wheels instead of one, plus increased stability when going around curves. (Technically, this is because the dynamic center of gravity forms a triangle with the front edge flat, this means it extends outside the vehicle outline during cornering and braking). It simplifies (no differential and it's inefficiency) the power train too, since there is only one wheel to be driven. This is why some advanced electric cars use this configuration.

Two (or fewer)-wheeled (AKA bicycles) vehicles inherently let the operator lean into curves, keeping the dynamic center of gravity over the vehicle. This is a major issue with three (or more)-wheeled vehicles. For this reason, sophisticated designs tilt the wheels while cornering.

In a recumbent tricycle, like a recumbent bicycle, the rider sits in front of the rear wheels instead of over them. The 'bent trike population is increasing in the Davis area. I hope more will find this and add their pictures and stories. 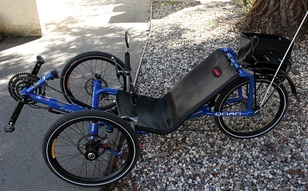 Catrike RoadkatieLytle I bought this trike from Hugh at PBW in Chico. I've seen other Catrikes along with Greenspeeds and Ice's in town.

2007-08-24 19:46:50   This is a great option if you're like me and were unsuccessful at learning to ride a bike as a kid, and do not feel like donating blood and skin to the cause now. It sure beats scheduling my life around the bus, spending an hour walking home, or paying to park on campus! A couple people have yelled at me on the street, so maybe I look like a dork, but we're not in middle school so who cares? —LindsayClark

2009-03-08 18:44:26   I got my first [recumbent] trike because of joint problems. I was tired of riding=pain. Also, there's something very interesting about being so close to the ground. —katieLytle

1. There are also paired wheel scooters that have three wheels but are not generally considered tricycles, as they don't stand up when at rest