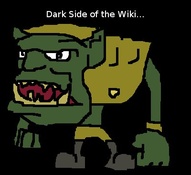 A photograph of a rare Davis Wiki troll shortly before it devoured its prey.

Trolls are mischievous, supernatural creatures originally found in Scandinavian folklore. But they've found that they can use the Internet to spread mischief far beyond their native bridges and caves. Trolls can be found in Davis, too, and sometimes they even grace our beautiful Davis Wiki.

Not all trolls are bad; there's BarnabasTruman, said to be a sociable troll that lives under the bridge next to Olson. The rumor that he eats a freshman each quarter is definitely false.

More commonly, however, trolls are not so sociable. They post hostile and contentious claims on Davis Wiki, thrive off spreading obnoxious rumors, say things that make you want to reply (with your own rude comments), and ignite edit wars. Indeed, the defining characteristic of a troll is someone who is just looking for attention and trying to provoke a response from you. (That, or having freaky hair and plastic gemstones in place of bellybuttons.)

A 2008 New York Times article describes the psychopathy and downright misanthropy of trolls. It further details why we should be careful in how we interact with others on the Internet.

Often trolls act under the cowardly guise of a false screen name. This is the most unwelcome type of troll, and sometimes the most malevolent. Beware of contentious information posted by individuals who appear to be masking their real identity—the information may be a lie uttered through the foul breath of a troll.

Don't mistake an individual with a differing viewpoint with a troll. Trolls do things like:

Sometimes those new to the wiki do not yet understand how things work, and they might do something like remove a point they disagree with. They will learn and will eventually stop when questioned — be polite. This is what differentiates trolls from newbies: Trolls do not stop until they get what they want, while newbies respond by adapting to wiki etiquette.

Trolls should not be confused with wiki gnomes.

What's to Be Done?