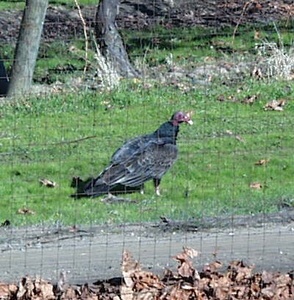 When wildlife or freshmen in the area expire, one of the possible outcomes is attracting vultures. This one was dining on west campus near the creek.

Turkey Vultures (Cathartes aura) are some of the feathered year-round resident wildlife of Davis and are common throughout the rest of California, though there seem to be less of them around campus and the other urban parts of town during the Winter.

Though Turkey Vultures generally look a lot like the old world vultures, they share name only. They belong to the Cathartidae, which was briefly grouped with storks, herons and egrets in the order Ciconiiformes but is now back with Falconiformes. Similar species include the Black Vulture and the California Condor, neither of which is likely to be seen around Yolo County. The Turkey Vulture is easily distinguished from the former by its red head (on adults), and whitish remiges (the feather on the trailing edge of the wing) on the underside of the wing. From the latter, it is distinguished by smaller size and underwing color—the California Condor from below shows white triangles against black. Also, the Turkey Vulture often “wobbles” in flight and sometimes holds its wings in a crimped V-shaped position.

Some Turkey Vulture statistics from The Wheeler Guide to Raptors of Western North America:

Turkey Vultures are susceptible to illegal shooting, lead poisoning and electrocution — the same problems that affect the California Condor — but are not threatened as a species and possibly number over three million. In town, the California Raptor Center helps take care of birds of prey. 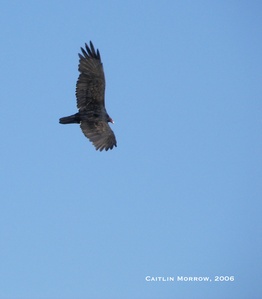