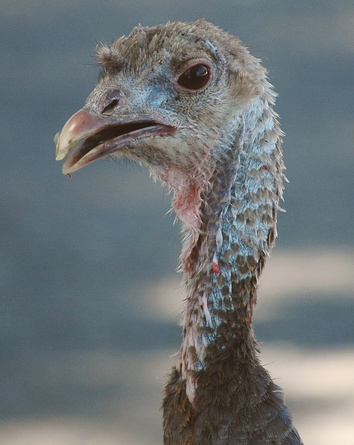 An attractive young female turkey spotted at 5th and L

Wild turkeys and pheasants can be found in riparian and other uncultivated areas. Locally, Branigan's Turkey Farm in Woodland has been farm raising domestic turkeys since 1942. Former President Ronald Reagan used to get his holiday birds from Branigan's.

In the fall of 2007 a relocation plan was announced for the turkeys. While no connection could be established between the turkeys and Al-Qaeda, it was decided to pay $750 per bird to relocate them rather than to go down to Davis Lumber and buy an axe.

In November 2011, some of Davis's turkeys found themselves homeless when old Chiles barn they used as a base was torn down to make way for a new Chiles Ranch development of 108 homes.

Recently, a guinea fowl spy has infiltrated the east side turkey gang.

In October 2016, Downtown Tom and a growing turkey population led the Davis City Council to adopt a wild turkey management plan. Turkey populations city-wide will be kept below 80, by "discouraging residents from feeding the birds, mass capture and relocation, [by] promoting natural predators such as foxes and coyotes, and “selective lethal removal” of overly aggressive turkeys." 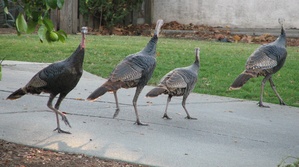 A group of turkeys which grew up at the Davis Cemetery walk along Regis Drive November 2006. 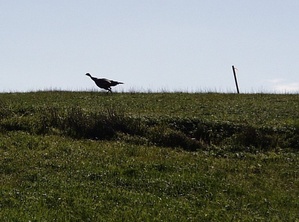 A wild turkey photographed at the UC Davis landfill 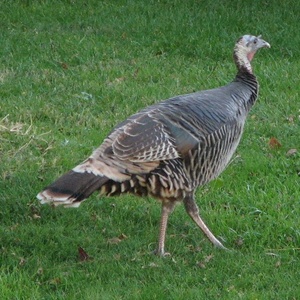 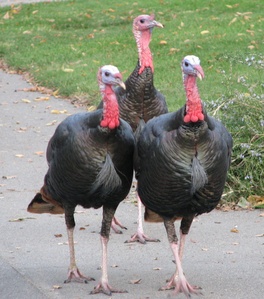 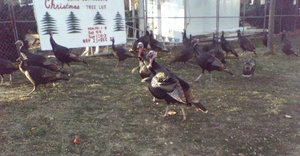 Photo of part of the flock, November 2008 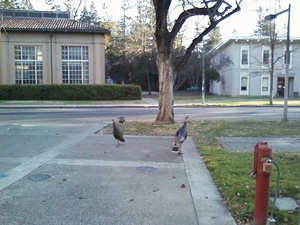 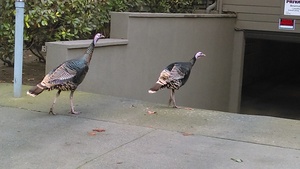 Turkeys off to explore a garage in downtown Davis (January 2016) 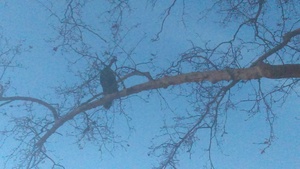 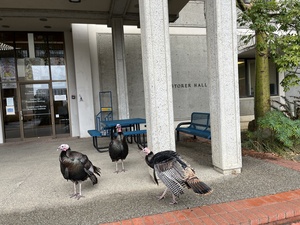 Turkeys sheltering from the rain on campus (December 2022)

- I often walk in the area around the Davis Cemetery, and the wild turkeys seem to range most often in the region bounded by Pole Line to the west, Regis Drive to the north, Mesquite Drive to the east, and East 8th St to the south (typically in the vacant field where the fire crew trucks park). The last time I saw them (in the cemetery in March 2007), I counted 9 of them. I suspect they spend most of their time foraging in the field to the east of the Davis Cemetery —AlexPomeranz

2007-10-19 14:54:33   Articles in the Aggie and Bee indicate the wild Turkeys are being eradicated from the Davis Cemetery and surrounding area. I saw the turkeys a few weeks ago crossing Loyola. They were beautiful and unexpected. The article says, "Though they've never bitten or clawed anyone . . . ", yet people "feel threatened." If we want the world sterilized of the unexpected which present no threats, where is the beauty? Is it only on TV? We as a people are becoming far too docile. Once everything is sterile, we'll all be happy. Except me, I'll remain cynical. —AlanMiller

2007-11-19 09:50:03   I pass that vacant field commuting to work each day. The flock contains at least 30 birds, and they are generally in the field and the yards of the houses across the street just before 8am and around 3pm. They walk around on the roofs and cars of the people who live there, and I imagine if they are as messy as geese then I wouldn't be happy if I lived there. It's almost thanksgiving and you can walk right up to them. you could easily grab one... —mvd

2007-11-21 12:11:19   I went there this weekend and the flock was still there. It was actually nice to know the Turkeys are still there. It just adds to the ambience. —CarlosOverstreet

2007-11-22 17:41:24   They were still there yesterday morning. I drove down Pole Line around 6:50 A.M. and there were at least 20 of them walking down the bike lane. I told them they should run and hide. Hopefully, they chose to heed my words and none ended up on anyone's dinner table today! —CatLa

2007-11-25 17:35:23   This afternoon there were maybe 20 turkeys on the roof of a house on East 8th right before L. The owner was standing in her front yard looking bemused and there were a few people gathered on the sidewalk... When I drove by again a half hour later, they were gone. I thought it was exciting and I would have stopped to stare if I hadn't been in a car. —ElleWeber

2007-12-20 14:45:45   I was shocked when I first moved to Davis, after I saw a group of three turkeys freely wandering down the side of Pole Line. One of the most funny moments was seeing three turkeys (the same ones?) following the mailman as he made his route down 8th Street. I know I've heard of mailmen getting chased by dogs, but only in Davis do they get followed by turkeys! —hokusman

2010-11-15 21:54:05   For the last few days I have seen a few wild turkeys wandering around my apartment complex at Orchard Park. I am, of course, assuming they are wild because this is probably the time of year when turkey farmers would want to keep their potential profits from running off wherever they want. I must say I was impressed by their (the turkeys') confidence as they sauntered about, completely unaware or unconcerned about any dangers that may befall them. —flo

2011-08-01 11:37:45   There are several hens and many more poults wondering around Solano Park Gardens, eating all our strawberries! Unfortunately, I've heard they eat our snakes, who keep down the rodent population. —BrianNeal

2011-12-23 12:30:06   Turkeys roaming the Davis Cemetery area are one of the most enchanting aspects of Davis. I love them, and visitors I've had are always quite taken by them. I guess I would like if people would lay off the horn when coming upon them. Every spring they hatch baby turkeys— strangely most of the adults disappear afterward. I would really like if someone could assure me that they are taken to another farm to roam free and happy. —ActionFigureBarbie