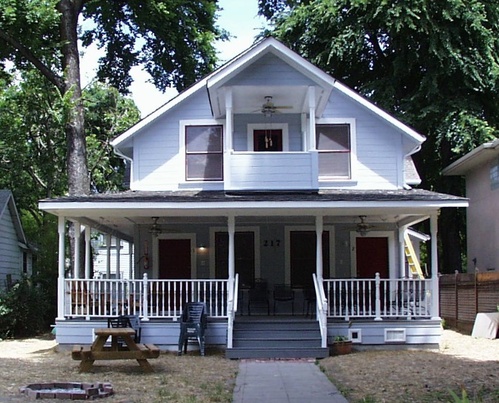 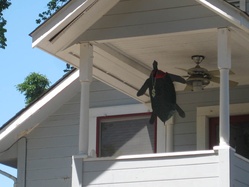 The Turtle House was named after the large turtle once displayed outside the upstairs balcony. In Fall of 2003, someone stole said turtle. A large music note graced the balcony before the turtle, and at that time the house was known, appropriately, as the "Music Note House." The house is still referred to as "Turtle House," though some call it the "Ex-Turtle House." As of Winter 2008, there was a new turtle in the balcony, which was stolen during the following Whole Earth Festival, which was returned by the original culprits in 2010 when they realized their friends were current tenants.

From 1993 to 1996, the Turtle House was inhabited by members of the band Knapsack (some of whom went onto the Jealous Sound while Rob landed in Portland and played with The Hospitals). Knapsack filmed a video in the basement of this house for the debut single from their first album on Alias Records in 1995. The video was first played on MTV's "120 Minutes" and later was repeatedly aired as a "buzzworthy" video. Members of Shove and Skyscraper also lived in the Music Note / Turtle House in the 90's.

In 1998 the Turtle house residents invited the San Francisco based jam band Tea Leaf Green to play in the basement. Engagements at the Turtle House, and elsewhere around Davis, followed in the subsequent four-year period. Perhaps most notable of these was a series of collaborations with the noted Davis blues artist, and UC Davis art professor, Mike Henderson. During this period the Turtle House also played host, and occasional recording studio, to several locally active bands including 11-11, Uncle Harlen's Band, the Animal Liberation Orchestra and various combinations of the members of the Free Association.

In June, 2005, the Turtle House was sold. It was vacated due to a long, long list of health and safety issues that were discovered during the City of Davis' required resale inspection. The long-time absentee landlord had done 30 years of maintenance on the house but had neglected either to get or close the permits on the work. The new owner, former City Council member Michael Harrington, remodeled the house into a 3 unit rental for student/workforce housing.

As work progressed on the house over the summer, the true condition of the house became apparent and the house had to undergo multiple organ transplants. Most of the repairs and substantial upgrades (new central air, new sewer, plumbing and electrical, Internet and completely renovated bathrooms) have been completed. The basement is cleaned up and ready for entertaining, with new electrical outlet strategically placed for convenient use.

There was delay on replacing the porch when City Planning required a 500 foot notice to neighbors before resuming work over the Christmas holidays. The porch was completed May, 2006, coinciding with construction on the back of the house that replaced illegally-built back bedrooms with City-approved ones. The yard has been cleaned up and a new plan for the yard is being created. 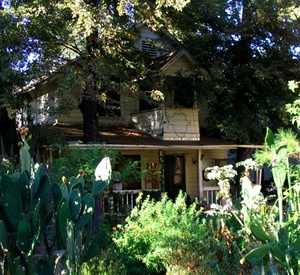 The old Turtle House. You can see the outline of the stolen turtle above the balcony. Photo 2004.

There was much debate about the naming of this house given the winding history. Some people feel that the name should be "taken" from the house, while others simply go on calling it the Turtle House. "Sort of like a Jerry Springer show for pseudo-intellectuals."

In the Winter of 2012, a legion of anonymous heroes built a pleasurable underground society beneath the Turtle House. Their meetings are secret, Activities unknown, and their knowledge of traditional coffin varnishes unmatched . under the alias of "Nook", the mysterious legion aims to foster a great and poignant weirdness that will leak into the hearts of the greater Davis area.

Early in 2012, Michael Norcia signed the lease on the turtle house as well as the small cottage adjacent to the house. With dreams of building a community of friends, 15 compatriots decided to sign onto the lease, joining Michael in what could possibly be the most daring, earthshaking, mind-blowing, life-altering journey into the smallest nooks and most expansive tundras of the human condition. What the turtle house will become over the course of the community's two year experiment, no one knows, nor dares presume.

In the mean time, while waiting for the house to switch hands, the community has been occupying themselves with various trips and a giant music playing tricycle, which will reside at the house in the coming years. 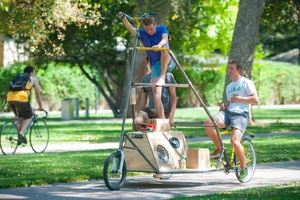 The sound trike, or "Spring quarter swag-mobile" as some might call it. Picnic day, 2012.

Alas, it is 2014 and there are new, smelly, short hippies roaming the property. No one knows who they are, for they are not as hip, old, or tall as the fellows who once ruled. It is mythed that they even slaughter their own roosters and make their own brew. Hammocks sway in the wind, over plants coming to life. Stand and watch by the gate as these newly hatched sea turtles drift through the front yard, taking their baby steps into the the great, dank ocean that is Davis, California. LJRS 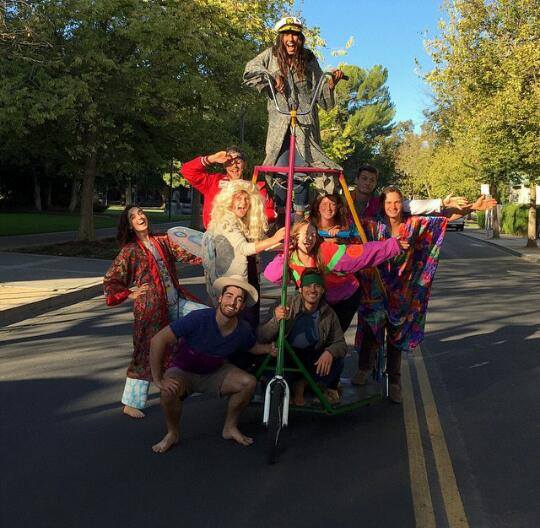 In the year 2016 some yung turtles took unto themselves to create an "out-of-shell experience" for the palates of Davis. Deep in the basement of the Turtle Haus, delectable fine meals were served under twinkly lights, plated with swoops of sauce facing concave north, sprinkled with edible flowers, topped with sprigs of miners lettuce. These meals were a treat.

And now the year 2016-2017 brings EVEN SHORTER turtles... how is this possible. A dog, two cats, 6 or 7 chickens, the turtle, a flock of quails, and the rumored pink poodle. Music floats from the property, prickly pear beer drips down the stairs, and the hammocks still sway. KLP

Haus activities have continued with whiffs of tradition, hints of spontaneity, and dashes of communal progress. Shows occur semi-regularly, and some have been chronicled and added to YouTube here for those interested in taking a peek into the art fostered by yung Turts.