In the Arboretum you'll occasionally see a turtle or two sunning themselves on the sides of the creek. There are actually quite a few turtles in the creek. Really any permanent pond or stream in Davis has a lot of turtles in it and if you know what to look for you'll probably spot them. The cool looking stubby ones with the tails are the native Western Pond Turtles and the more commonly seen stripey ones are the prolific and invasive Red Eared Sliders. They will hiss at you and are pretty ornery little bastages

Many of the Arboretum turtle resident's are actually former pets of the Red Eared Slider variety. On a fairly annual basis Professor Brad Schaffer a Herpetologist in the Evolution and Ecology program traps out the non-native turtles, if you would like to adopt one and will promise never to release it back to the wild contact his lab. A study by the Schaffer lab has a discovered a sizable population of native Western Pond Turtles too, but the presence of rapidly growing non-native competition and the lack of dispersal sites puts into question the viability of population. Paper on the topic http://www2.eve.ucdavis.edu/shafferlab/pubs/SpinksBioCons2003.pdf

Maybe someone could start catching and selling or eating the Red Eared Sliders? 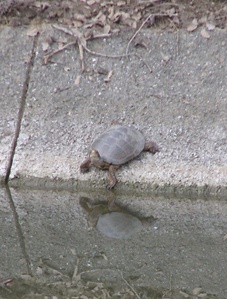 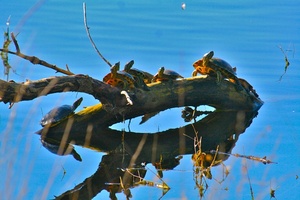