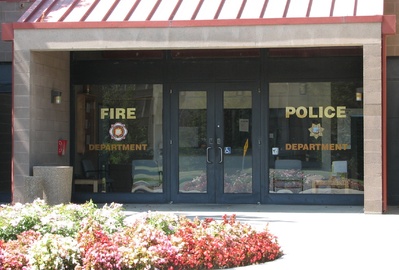 Front entrance to the combined Fire and Police Building

In addition to enforcing the law at UC Davis and the UC Davis Medical Center, the UCD Police provide the campus lost and found, finger printing services (livescan) (but only for UC-related jobs) , patrol ride-along, and personal safety education through CVPP. The Aggie Hosts, a student policing program, provides a free Campus Safety Escort Service. To use this service call 752-1727. Note that this is not part of the police force, but rather part of Campus Security, a separate organization.

The UC Davis campus is where you have the best chance of encountering UCD's scooter cop.

On May 18th, 2005 Annette Spicuzza was sworn in as Chief of Police, replacing Calvin Handy. The job has a salary of $125,000 a year. She was the first female chief at UCD, although Captain Rita Spaur was acting chief before accepting the position of Chief at UC Merced earlier.

On November 21, 2011 Chief Annette Spicuzza was placed on administrative leave in the aftermath of the pepper-spraying of student protesters on November 18 by Lt. John Pike and one other officer. UC Davis Police Lt. Matt Carmichael was appointed interim Police Chief; on April 29, 2012, after Spicuzza retired following the release of the Reynoso report, Carmichael was made Chief for one year.

752-1230 would be a very good number for cell phone users to program into their phones. Also 758-3600 for non-campus emergencies. When you dial 911 from a cell phone, you are connected with a CHP dispatcher who generally has no idea what's going on. It will significantly reduce the emergency response time if you call dispatch directly.

ASUCD created the ASUCD Student-Police Relations Committee to create sustained dialogues between students and both police departments. As part of the sub-committee work, the UC Davis Police Department answered a list of frequently asked student questions of the police - FAQ Student-Police.

The department maintains a daily crime log on their web site.

On Dec. 14, 2004, UC Davis police shot and killed Martin Louie Castro Soriano, a 26-year old visitor from Antioch, outside of Regan Main. Soriano, who was high on meth, had shot at the cops when they attempted to subdue him with a Taser. The police were cleared of wrongdoing.

UC police have the same kind of legal protection as state troopers, which makes them incredibly difficult to sue for issues of police misconduct. (CA Penal Code sec. 830.2(b) ) This is due to the fact that they *ARE* state troopers (what better location to stage state troopers than the UC system scattered thru Cali...) One could pull you over in LA for a traffic infraction and be legally justified in doing so. Even though they have oodles of power, they are rarely itching to use it and have been known to refuse assistance requests from DPD when asked to go handle something in el macero. UCD cops mainly stay on or very close to campus —StevenDaubert

Reported on February 3, 2009 a police officer was fired for being openly gay:

"Calvin Chang, who is openly gay, says his dream of being an officer is over.

"Basically, they destroyed me," he said. "All I wanted to be was a police officer all my life."

Chang says those dreams are gone after what allegedly happened at the UC Davis Police Department, his former employer. In a lawsuit filed this week, he claims his supervisor called him derogatory names.

"My own supervisor referred to me as a f—ing fag," Chang said.

Chang was initially fired by UC Davis Police in 2003. His managers told him he was a high-risk officer because of three car accidents. He was reinstated after an investigation, and then fired again last spring over allegations that he failed to have a backup officer during a search." Clipped from: CBS 13 Reports

On November 18, 2011, campus police used pepper spray and force to disperse seated protesters on the Quad. Coverage of the incident is detailed more fully here - not to mention in the national and international press.

2011-11-19 03:18:23   After the way the UCD Police Department brutalized students during the UC Davis Occupy Protest on November 18, 2011, I have no idea how anyone in the community could ever trust these police with ensuring our safety ever again. The videos/pictures were horrifying to watch. —ThUn

2011-11-19 16:53:01   In 2004 I was stopped on Russell Boulevard by one UC Davis motorcycle policeman and two other UC Davis policemen in squad cars. The reason for stopping me I found out was that that the ignition switch was dangling from the steering column. They asked that I get out of the car and walk to the back of the car. I was cooperating, but one of them grabbed my wrist with enough force that I was asked why I was wincing. They seemed to have a sadistic streak. Not long afterwards the UC Davis Police killed a man by Regan Hall on December 14, 2004. I figured that outcome was likely in a serious situation involving this police department. It sure would be nice if this department was totally decent. —BruceHansen

2012-01-16 20:27:57   I've never had a good experience with these guys. they don't have good people skills and seem to think ridicule is standard procedure when dealing with cooperative citizens in question. DPD on the other hand has USUALLY been pretty tight though, with very few exceptions, at least in my experiences. —Aaronfurtek

2012-03-22 09:49:40   I'm still waiting for more info from UCD, but it looks like UC Davis Police be implementing a "Bait Bike" program, similar to the controversial show "Bait Car" as a way of deterring bike thieves. Interesting approach. Insurance for the bike ($681.40) was approved by ASUCD. I'll add info to the Wiki as I get more concrete info on this story. http://patch.com/A-rLCP —justincox22