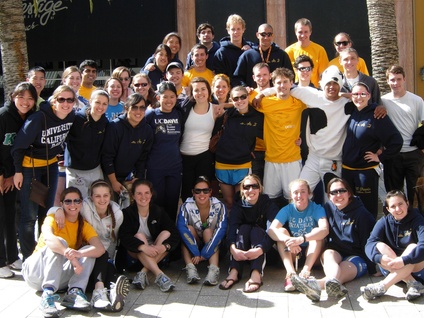 In the 2010-2011 school year, UCD Tri had approximately 120 members on its roster. Membership costs $125 and is restricted to UC Davis undergraduate and graduate students. The team welcomes athletes of all ability levels, ranging from complete beginner to advanced triathlete.

During Fall, Winter, and Spring Quarters, swim practices are held Monday-Friday from 4-5 PM at Hickey Pool. For cycling and running practices and other activities, members use an online workout calendar found here to coordinate meeting times and locations. All members are allowed to (and encouraged to) post their own workouts. In this manner, any member can fit triathlon training into a busy schedule. There are no required practices, but the team stresses that “you get out what you put in”.

Daily team responsibilities are managed completely by UC Davis students. However, for training, the team seeks advice from John Hansen. Coach John writes bi-monthly newsletters and creates monthly training calendars. He also coaches 2-3 workouts per week, a Wednesday swim and track workout and a weekend BRick (any 2/3 sports in one workout, often a Bike-Run), cycling, or running workout. The rest of the swim workouts are lead by student workout coordinators.

The team also hosts a variety of clinics designed to teach members about various topics, including fixing a flat tire, general bike maintenance, race nutrition, preparing your transition area, swim technique, etc. Members can always submit suggestions to Coach John and to officers as to what clinics they want. Talking to Coach John and to older members is also a great resource, especially for beginner triathletes!

In order to offset costs, UCD Tri has many sponsorships with local and other sports businesses, including Ken's Bike & Ski, Rudy Project, XTerra Wetsuits, GU Energy, and many others! 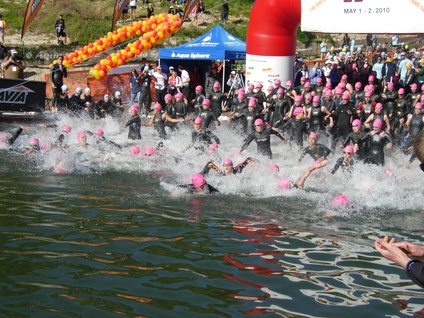 There are varying triathlon race distances:

The UCD Tri racing season begins at the end of February and continues through the end of the school year. UCD Tri is also a member of the West Coast Collegiate Triathlon Conference (WCCTC), competing against other west coast schools. The following is a list of subsidized team races:

For these team subsidized races, the team race coordinator takes care of team lodging as well as carpools.

UCD Tri hosts the annual UC Davis Sprint Triathlon in mid-April. Everyone is welcomed to race and volunteer. The race involves a 750-yard open-water style swim in Schaal Pool, followed by an 18-mile bike on the UCD Tri Race Course and a 4-mile run through the Arboretum.

Nervous about competing in a real triathlon? UCD Tri also puts on a "mock tri" for members. This fun event gives aspiring triathletes the practice and confidence to compete in the upcoming race season! Also, members are encouraged to write "race reports". These sometimes lengthy (but witty) emails are sent over the listserve and commemorate the writer's races, including funny (sometimes embarrassing) moments and lessons learned. Some of these reports can be accessed here.

UCD Tri is not “all work and no play”. Members do a variety of activities outside of training/competing. Such events include BBQs and team dinners, camping, and an annual ski trip. The team is famous for its Paper Plate Awards given out at the end-of-the-year picnic. 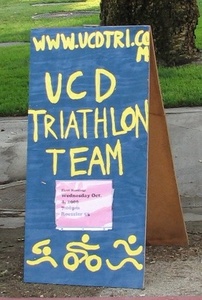 An older sign (no longer in use) informing passers-by of the UCD Triathlon Team. Photo by: Jason Aller

For more information about the team including recent events and how to join, create an account (with your first and last name) on the UC Davis Triathlon Team website, http://www.ucdtri.com, and check the About and FAQ page. You can also email [email protected] with your questions.

Perhaps the best way to stay up-to-date with team information is to add your email to the listserve. This can be done by going into your ucdtri.com account, scrolling down to "Member Links" on the "Home" page and selecting "Email List".