The splendor that is UCM.

UC Merced was the first American research university to be built in the 21st century. The campus opened in the fall of 2005 to undergraduate freshman students and boasts a projected enrollment of about 1,000 students. The campus itself is located 5 miles outside of Merced proper and is butted up against several farms. Merced is situated between Fresno and Sacramento along Highway 99, about 2 hours from Davis and UC Berkeley. Merced is the tenth campus in the UC System and their mascot is the bobcat. The campus Police Chief is former UC Davis police Captain Rita Spaur. The current incoming freshman class is smaller then anticipated by the university's admissions office. Their '06 freshman class is believed to have been diminished in part due to Davis gaining approximately one million two hundred thousand four hundred and fifty six freshman that year. Slightly above Davis' normal average.

The University has three colleges: 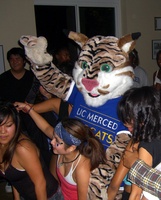 Merced's Mascot mixin' it up.

In either a rather dubious distinction — or, in a more positive light, a great starting point to move up from, Merced was ranked as the least educated of the 200 largest metro areas in the United States on December 1, 2010. Hopefully as UCM establishes itself, that will change.