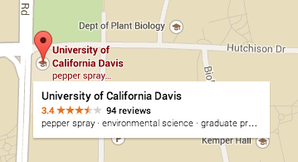 As of August of 2013, searching Google Maps for UC Davis resulted in "pepperspray" being the top auto-generated keyword.

For too long UC Davis has lived in the shadow of UC Berkeley and UCLA. Sure we're not a tier-1 school and all, but we have Aggie Pride! Yet our alumni have been forced to hear again and again: "UC Davis? Which one is that?" And then you'd say, "It's that one by Sacramento, but it's not actually in the big city." What a pain!

But now, thanks to Chancellor Katehi's secret plan, UC Davis is finally on the map. When your uncles ask you where you're studying Communications, or they ask you about your school in job interviews, proudly proclaim: "I come from the Pepper Spray University!" Now everyone knows about UCD. Those students and "non-university affiliates'" sacrifice has not been in vain — UC Pepper Spray now occupies America's hearts.

Although primarily a weapon, UC Pepper Spray could possibly be used as a hot sauce if you let a few drops fall into a gigantic barrel of salsa and mixed thoroughly with a broomstick for about ten minutes. At about 5,300,000 Scoville Heat Units, UC Pepper Spray is almost 4 times stronger than Da' Bomb, the spiciest non-weapon sauce sold at Pedrick Produce.

It has become the memetic standard unit for pepper spray usage, as indicated when a similar incident occurred in Germany, and the introductory photo to the article was our own UC Davis.