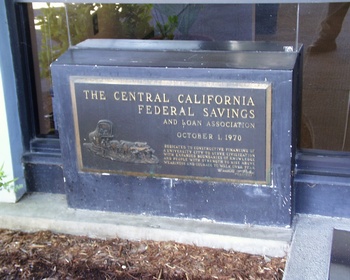 Cornerstone or time capsule from before it was US Bank

One of several Banks in Davis. A branch used to be located in Anderson Plaza where Chamonix Coffee used to reside. It may have moved after being robbed 3 times. StevenDaubert says the location that would constantly get robbed had an ATM that would give out 10's as well as 20's!

Several years ago UC Davis announced a joint project with US Bank for a full US Bank branch inside the MU, along with six new ATMs. http://www.news.ucdavis.edu/search/news_detail.lasso?id=9248 US Bank made a deal with UC Davis to place the US Bank logo on all student ID cards in exchange for the exclusive right for the next generation of student ID cards to be used as US Bank ATM cards. Reg Cards were redesigned and renamed to the new Aggie Card. The new card has the ability to be used as a US Bank ATM card if you sign up for a US Bank account. It can be used for PIN-based purchases, but it cannot be used for signature purchases like a credit card.

The new US Bank branch opened up in the MU, however the branch was the scene of repeated protests and sit-ins. US Bank decided to abandon the branch and leave campus on February 28, 2012. Some people felt that corporate advertising had gone too far with US Bank logos being plastered onto every single student ID card. Other people felt that US Bank's goal was to crowd out all other bank and credit union business and get as much student business as they could. However, the apparent goal of being the campus' bank monopoly was thwarted by repeated protests. Students didn't appreciate US Bank and US Bank decided to abandon their campus bank branch since it was not profitable for them. Chancellor Katehi has mentioned that several other banks immediately started asking for the spot when US Bank left.

Misdemeanor charges have been filed against 12 people connected to the on-campus U.S. Bank protests. They are known as The Davis Dozen.

Davis Dozen Student Protesters Plead Not Guilty — To be Defended by Legendary Defense Lawyer Tony Serra, aka the "Semantic Samurai", May 10, 2012

The only place to find a US Bank ATM in Davis is at the US Bank branch in downtown.

US Bank used to have ATMs located at the MU ATM Wall, the ARC, the Health Sciences Complex, the MU Games Area, Silo, Mondavi Center, and at the former US Bank branch at the MU. However, in 2012 US Bank got rid of all of their ATMs on campus. This now forces US Bank customers to get cash at other ATMs which amounts to a total fee of about $4.50.

I have always found it annoying that US Bank requires parent signatures for minors to withdraw money or cash checks larger than $20. StephenHudson Since when did they start this? —StevenDaubert Since my parents purposefully set up a limited savings subaccount for me that I was only a cosigner of. My mistake. StephenHudson

Kerrian(sp?) is simply one of the coolest women around. Gave me great purse-cleaning tips. Thanks, girl!

2010-09-29 08:53:34   By far the ugliest bank in Davis, both outside and inside. Their hours (closing at 5 p.m.) are pretty inconvenient. And from what I understand (if I overheard the teller correctly) the Aggie Card is NOT a debit card, it's an ATM card. That means you can use it to get money out of a US Bank ATM, but you can't use it to buy food at the CoHo or books at the bookstore. Useless. —jsogul

2012-01-25 01:19:22   I went to the MU branch today, and they've hired a security guard, which was a surprise to me. Apparently they were shut down by sit-in protests so many days out of the last two weeks that (at least for now) they are keeping out anyone who doesn't have a US Bank account and card. —StephenHudson

2012-06-01 01:23:32   I think it's important to acknowledge that much of this information is not accurate. The university told US Bank to leave because UCD is trying to stay out of headlines after the pepper-spraying incident. The students brought a lot of attention to US Bank and the university didn't want to take any action to allow US Bank customers access into the branch (as protestors made it impossible for US Bank to conduct business). That being said, I do not support corporations on the university campus. US Bank is just another corporation. Many people look at banks as being something evil, but just like all businesses, they offer products our culture demands. For those interested in really making change, work on banishing all corporations from conducting business on public university property and really make the university represent public education, not privatization. The blame should really be placed on the university, not US Bank. —Smitty

US Bank also recently got rid of all their ATMs on campus - there was one in the ARC and one recently added at the MU - now i have to pay the $4.50 fee to get out some cash. WTF?