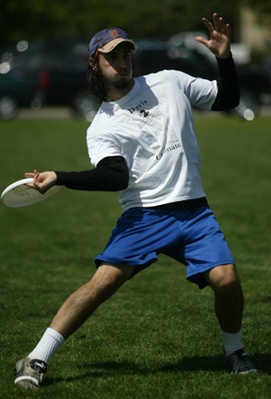 A member of the Davis Dogs prepares a pass, Spring 2005.

Ultimate frisbee is a game that is popular at many college campuses. Many can be seen playing it in the quad or a park on a nice day.

In recent years, Ultimate Frisbee (aka: Ultimate) has become a competitive sport. UC Davis has two ultimate frisbee club teams: Rogue (women) and the Davis Dogs (men). In addition to the club teams, there is also an IM league during Fall, Spring, and Summer quarters and Physical Education classes.

Ultimate became a sport with the founding of its national governing organization in 1968. Why you should play Ultimate.

Games in Davis include:

The game requires two teams and a frisbee. Ultimate is governed my the "Spirit of the Game." There are no referees and players are encouraged to rat on themselves and play the game fairly and cleanly.

More detailed rules on Ultimate can be found at the national governing body's website: http://www.usaultimate.org/index.html The Ultimate Player's Association became USA Ultimate in 2010.

For another fun game of flying discs, check out Disc Golf. Several other varients exist including goaltimate and Hot Box.

2010-11-03 16:37:37   Are there any ultimate leagues or events in Davis for 20-30 year olds not affiliated with the University? Something like a fun, not super-competitive, place where people meet up at a regular time for informal pickup games? —BrianNaiman

Check out the Ticks group, listed above. Today (Nov. 3) is their last weekday game for the season due to daylight savings time, but they still meet on Sunday afternoons for pickup. Turnout varies depending on the weather, but they typically get at least one game going, and sometimes two. They send out an e-mail reminder weekly. I know there are some leagues and tournaments in Sacramento, as well. I believe there's a hat tournament a couple of times a year, as well as semi-competitive (i.e. between good pickup and mediocre club) leagues. The leagues run along roughly the same timeframe was UCD Intramurals in the spring and fall, and possibly over the summer. —TomGarberson