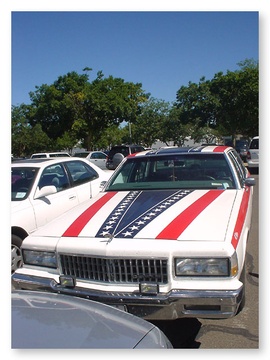 Found in Lot 25, June 2005. Resides in The Arbors and dubbed the 'General Grant' by some neighbors. Driven by nice blond woman.

With a constant influx of new people, personalities and outside influences Davisites are pretty open to the new and unusual. And when it comes to transportation, we get to see some pretty unique vehicles for a town of this size. Not just your typical rice rocket, but vehicles that fall under the category of "Art Cars" or something along those lines, as well as some cutting edge vehicles that you're not likely to see in your average American city, all manner of bicycles, scooters, and home grown transport devices. Makes sense in a university town with a kick-ass engineering department! Some have become fixtures in town, while others come and go with the student tide. Either way, spotting one of these usually brightens your day a bit. And if it's things like this that just make you wish you had the time and knowledge to build something nearly as cool, check out the Arcata to Ferndale Kinetic Sculpture Race Memorial Day weekend. For the Glory!

There are also cars who have been customized with funny bumper stickers.

Trucks at the Senior Center

2007-02-25 18:56:44   I sometimes come to town for client work in a City CarShare-owned Prius, or in my photovoltaic-and-wifi-enabled VW Westfalia. —GrahamFreeman

2007-05-01 22:46:58   I saw a bus on Monday afternoon in front of Bistro 33. The bus was painted yellow like a school bus, and appeared to be an open-top double-decker bus. The top deck was made to look like the bottom of an upside down bus such that the whole thing looked like an upside-down bus on top of a right-side-up bus. —DavidGrundler The us economy is topsy turvy? The stop sign on the bus was pie chart of spending with defense taking more than half? —StevenDaubert

I've seen some guys riding around town in an older light blue VW Beetle. Both times they were wearing what appeared to be bowler hats & suits. Anyone know who the heck they are? —KokoSorensen