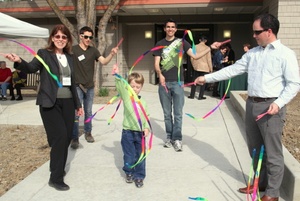 The new UUCD meeting hall was dedicated in spring 2012. 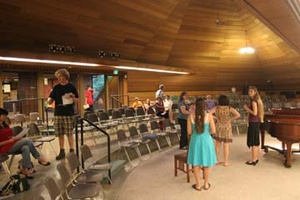 A view inside the sanctuary.

The Unitarian Universalist Church of Davis is a liberal, noncreedal spiritual organization that welcomes and affirms a diversity of religious belief, sexual orientation, gender, ethnicity, culture, and physical ability among its members and visitors. Originally the Unitarian Church of Davis, founded circa 1955, the congregation changed its name to Unitarian Universalist Church of Davis around 1990. While the Unitarian Universalist religion historically originated from two Christian sects, there is currently no precisely phrased statements of belief to which members subscribe, and its members are from a variety of religious and non-religious traditions, including Christianity, Buddhism, Paganism, and atheism to name a few. Beyond exploring truths found in the world's religions, the church is heavily focused on issues of peace, social justice, and environmentalism. It is one of several churches located in West Davis.

Services consist of lighting a chalice, hymn-singing (using hymns that often sound vaguely Christian but don't contain specifically Christian doctrine), a period of silence for meditation and prayer, and a sermon whose topic is not typically a text from the Bible as is common in Christian churches. Sermon topics in the past several months have included such diverse topics as fear, the nature of time, sex, aging, changing seasons, the politics of food, and the story of the good Samaritan.

The Unitarian Universalist Church of Davis is an active participant in the Interfaith Campus Council, and has a campus ministry for the UCD student community. It participates in community service organizations such as STEAC, Progress Ranch, and Davis Community Meals.

UUCD is a UU Ministry for the Earth certified Green Sanctuary. The grounds are planted with trees from around the world and are a great place to go for a walk.

From their website: “Unitarian Universalism is a liberal religious tradition that affirms that religious inspiration comes from many sources—direct experience and mysticism, prophetic women and men, the world’s religions, Jewish and Christian teachings, humanism and science, and earth-based spiritualities. We encourage people to develop their own worldviews while together engaging in social justice—working to end oppressions like racism and homophobia, and to save the environment.”

Principles and Purposes of the Unitarian Universalist Association We, the member congregations of the Unitarian Universalist Association, covenant to affirm and promote: The inherent worth and dignity of every person; Justice, equity, and compassion in human relations; Acceptance of one another and encouragement to spiritual growth in our congregations; A free and responsible search for truth and meaning; The right of conscience and the use of the democratic process within our congregations and in society at large; The goal of world community with peace, liberty, and justice for all; Respect for the interdependent web of all existence of which we are a part.

Unitarian Universalism: The Living Tradition Unitarian Universalism is a liberal religion born of the Jewish and Christian traditions. We keep our minds open to the religious questions people have struggled with in all times and places. We believe that personal experience, conscience, and reason should be the final authorities in religion. In the end religious authority lies not in a book, person, or institution, but in ourselves. We put religious insights to the test of our hearts and minds. We uphold the free search for truth. We will not be bound by a statement of belief. We do not ask anyone to subscribe to a creed. We say ours is a noncreedal religion. Ours is a free faith. We believe that religious wisdom is ever changing. Human understanding of life and death, the world and its mysteries, is never final. Revelation is continuous. We celebrate unfolding truths known to teachers, prophets, and sages throughout the ages. We affirm the worth of all people. We believe people should be encouraged to think for themselves. We know people differ in their opinions and lifestyles, and we believe these differences generally should be honored. We seek to act as a moral force in the world, believing that ethical living is the supreme witness of religion. The here and now and the effects our actions will have on future generations deeply concern us. We know that our relationships with one another, with diverse peoples, races, and nations, should be governed by justice, equity, and compassion.