Unitrans was founded in 1968 as the University Transport System, when the Associated Students of UC Davis purchased two vintage London double decker buses to operate on two routes. In 1972, Unitrans was opened to the general public, with partial funding from the City of Davis. Since that time the ASUCD/City of Davis partnership has continued, and now Unitrans provides public transportation service to the entire city with over 40 buses on 15 routes, carrying over 3 million passengers a year. Additional photos of the buses can be found here, while a list of the fine pilots of these behemoths can be found here. 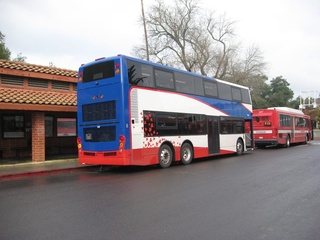 Unitran's newest addition: 40' Alexander-Dennis Enviro500 double-deck bus for (at the time) the G line. It appeared to begin service on January 10, 2010, after weeks of training. 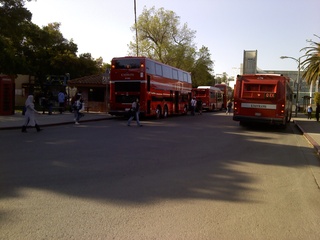 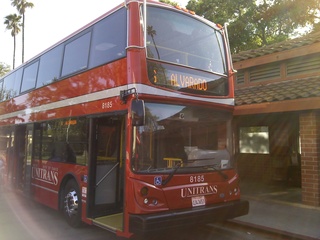 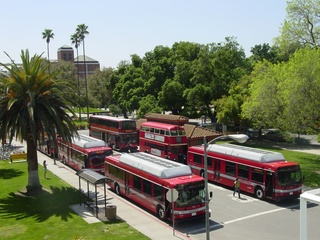 As the City of Davis and the UC Davis campus grows, so does Unitrans' service. With current operations covering 16 routes, the fleet has grown to over 50 buses.

Now Retired From the Unitrans Fleet:

Since the retirement of the last London RT Double Decker in 1978, Unitrans is perhaps the only transit organization to operate vintage double decks in regular service. The RT Double Decks are made primarily of wood, covered in metal paneling. Of course, this wood is exposed to the environment, and is therefore subject to rot. To maintain these buses in their prime condition, every 20-25 years a bus is pulled for service and completely overhauled from the interior to the exterior, replacing the rotting wooden frames with fresh, new wood. RT 742 and RT 1235 are currently undergoing frame restoration. RT 742 has recently been restored, and was painted in its original livery. It is the only RT double deck to sport a route number sign on the top, as well as a creme-colored stripe between the two decks.

RT 2819 is most likely the only RT Double Deck bus in the world to run on Compressed Natural Gas. As RT 1235 is restored, the bus will also be converted to CNG.

Though a symbol of Unitrans, UC Davis, and the City of Davis, the double deck bus is only a small portion of the Unitrans Fleet. 95% of the buses running in revenue service run on Compressed Natural Gas. Additionally, due to restrictions imposed upon Yolo and Sacramento Counties by the California Air Resources Board, Unitrans has nearly completely transitioned to an "alternative-fuel" fleet. The only remaining diesel buses are the RT double decks, which are being retrofitted to comply with stricter air quality standards set by CARB.

As any one who has seen a Unitrans bus can testify, the current signature color of Unitrans is red. Originally, the red color was unique to most of the double deck buses, while each single deck was white, with a red and blue stripe on each side. With the arrival of the Orion Mark V buses, Unitrans made the decision to standardize the fleet color to "Double Decker Red", and all new buses follow this color scheme. Buses sporting the original red, white, and blue color scheme have all been retired from the fleet and sold. 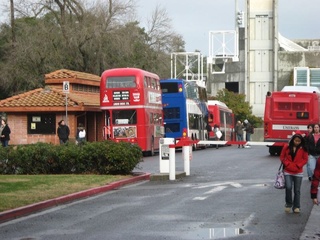 Three very different buses all in a column. Unitrans Fleet has evolved many times over the past 40 years. Unitrans continued to acquire RT Double Deckers, and at one point possessed nine in total. The number was reduced to six as three were sold over the years. Also operated in service were Daimler 40 Foot double decks. These were retired due to the expense and time required to maintain them in working order. The Daimlers existed for several years as the company jokes, the joke being that no one would live to see them roll off the yard except in pieces.

With the aging of the fleet, and with pressure from the CARB, Unitrans in 1992 acquired fifteen brand-new 35 and 40 foot buses from Orion Bus Industries of New York. These buses, powered entirely by Compressed Natural Gas, marked the move from diesel fuel to alternative fuels. Additionally, the change in color scheme from white to red was marked by the purchase of these buses.

In order to retire the aging GM fleet, a deal with Bluebird Bus Industries was made in 1994, and ten medium-duty transit buses were acquired from the "school-bus company". These buses were also powered by Compressed Natural Gas.

Unitrans acquired four new 40' Orion Mark V buses in 2006, and four more in 2007. The first bus, number 4171, arrived on March 20, 2006 in the early morning. The bus was driven across country from Orion's plant in New York. The driver actually arrived during the early hours of the morning, only to find that no one was present at the garage to accept the bus. He therefore slept in the bus while it was parked out front. With the addition of these eight buses, plus four 1996 40' Orion Mark V buses leased from Sacramento Regional Transit, the single-deck diesel fleet has been completely retired.

The Compressed Natural Gas (CNG) fuel tanks on the Unitrans buses have a service life of 15 years, and most of the 1996-era buses are approaching the end of their fuel-tank service life. Four of the 1996 40' Orion Mark V buses have been retanked, and will be preserved. However, the remainder of the 1996 40' Orion V buses will be retired from the fleet and sold by the end of 2009. Similarly, the ten Bluebird buses will also be retired and sold.

Unitrans has acquired twenty-five new low-floor design buses from New Flyer Industries, and has taken ownership of them as of December 1, 2009. These 40' Foot Excelsior C40LF buses are fueled by Compressed Natural Gas, and feature a new-look front end.

Unitrans has also purchased two 40' Alexander-Dennis Enviro500 double-deck buses, the first of which was delivered by January 2010. It went into service around January 10, 2010 — seemingly entirely on the G line. These buses are not intended to replace the antique RT Double Deck fleet, but rather to supplement them. The maximum capacity is over 120 passengers, larger than any other bus in Unitrans' fleet, and will help to alleviate passenger load issues on crowded lines. A demonstration model is currently loaned to Unitrans for training and testing purposes, and will remain part of the fleet until delivery of the second bus. The buses are powered by clean diesel engines, which meet the stringent 2010 California Air Resources Board (CARB) requirements, and run cleaner than our 1996 40' Orion V buses. The new double-deck buses will feature standard Unitrans livery, including the signature "Double Deck Red" color and the white stripe down the sides.

Unitrans' affectionate title for the Bluebirds (Chaos Theory) is quite apt. Bluebird's foray into urban transit buses was spectacular in its failure. For each bus Unitrans received, a separate wiring schematic was necessary. Additionally, each bus is designed with the CNG tanks on the bottom of the bus, creating an issue during hot summer months with fuel capacity (Bluebird's maximum range in the summer is barely 150 miles, whereas an Orion has a maximum range upwards of 275 miles), and the inherent danger of combustible, highly pressurized fuel travelling along on the bottom of the bus.

2006-01-23 09:51:06   On Saturday (1/21/06) I saw a brand spanking new double decker bus following the Unitrans Route near the Marketplace Shopping Center. Does anyone know if Unitrans is looking into some new doubles? —RocksandDirt

See today's The California Aggie and the Double-Decker Buses page.

2006-01-26 23:44:20   Unitrans is considering buying two of those, to operate primarily on a G and a new South Davis W line for the MU, to alleviate passenger load problems. —DanielHill

2010-04-20 23:51:27   There’s probably a more elegant way to phrase this observation, but: imagine a scenario at the MU terminal where the B- and G-lines are running the Enviro500; the E and F, London DDs (calling them that probably just exposed my utter lack of bus knowledge); and P and Q, same old. This sets up a scenario where the Q-line is the only bus where one can board “properly” (i.e., from the sidewalk), as B/G/P require people on the sidewalk to walk around, and London DDs are boarded on the left. —EBT