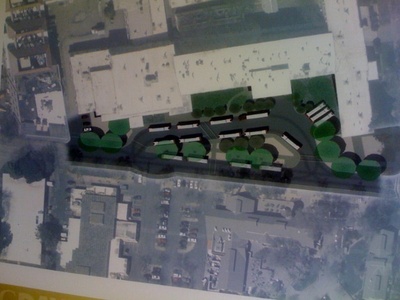 The current plan of the Hutchison Bus Terminal with landscaping.

Map of the Hutchison Bus Terminal with bus stops included.

The new terminal replaced the 49-space parking lot (Lot 29) that was south of Haring Hall. It provides terminal and layover space for up to 16 buses, going both eastbound and westbound. All buses that formerly loaded at the Silo, Shields, and Art terminals have been consolidated in the new Hutchison Terminal.

From the terminal, you can get practically anywhere in Davis.

Stops serviced on Hutchison Road. The former Shields and Art Terminals are still serviced as regular bus stops to any route that passes by. So, for example, if you want to board the A Line, you can wait at the Art Terminal and the bus will pass by and pick you up! The former Westbound Life Sciences stop has been eliminated and is no longer serviced by the C, D, and J Lines, so passengers have to walk down to the terminal to board their bus.

There are currently (as of 10/16) no shelter installations or benches at the terminal, though there are plans to install them eventually. Construction workers are also working on landscaping around the terminal, so the fences to the north and east of the terminal should be removed shortly.

80% of the funding for this project came from federal transportation funds. The other 20% came from student fees.

Construction began May 12, 2008 and was completed in time for the start of Fall Quarter 2008. They started construction by knocking down a giant tree by repeatedly hitting it with a backhoe — which doesn't seem like the most efficient way, but it's probably good stress release.

7/9/08 Update- The construction crew is almost finished doing the underground work (electrical, sewer, water) and are about to start grading. Soon the footprint will be visible and the plan will be clear to everyone.

9/25/08 Update - The terminal is now open. Landscaping work is still being done, mainly along the northern and eastern sides of the terminal. All bus lines that used to start/end at the Silo, Shields, or Art terminals now start and end at the new Hutchison Terminal. The Shields and Art stops are, however, still being serviced by any buses that pass by on their routes. 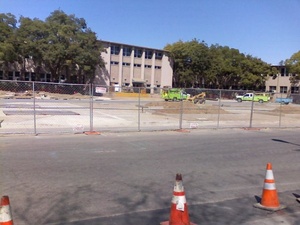 Continuing Progress as of September 4th 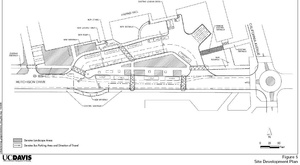 The diagram shows the terminal as it was proposed in the Environmental Impact Report of October 2006.

*They are still trying to decide where the gate is going to be moved. Obviously it won't be done before the construction on the Hutchinson Terminal begins. —ScottWeintraub

2008-05-18 12:49:56   This is probably a difficult thing ask for, but is it possible if the construction workers try to keep the construction debris down? I was riding my bike over to the Silo from Sci Lab and I saw a large plume of dust engulf a bunch of students on bikes. That dust could've gotten into their eyes and cause some major bike accidents. —EmilyTung

2008-05-18 16:31:59   Emily, they have been watering the area down periodically to prevent dust and the like, we call that area the desert now cause it's so bleak and barren —StevenDaubert

2008-05-30 00:21:28   Looking at the plans, I can only see one major problem: the removal of the sidewalk running along the south side of the eastern end of Hutchison Hall (where it says "remove existing sidewalk"). Given the way that students walk around on campus, unless they actually put a barrier like a wall or bush along the edge of that grassy area, people are just going to walk through there and there will be another one of those grooves of bare earth there. —JoePomidor