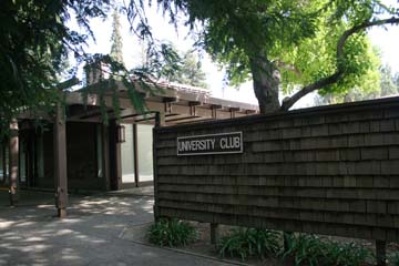 Front entrance of the U Club.

The University Club Conference Center, often referred to as the U Club, is a building on the UC Davis campus just west of Wyatt Pavilion. It features two primary rooms: the Clubroom and the Lounge (2436 and 1680 square feet, respectively). The center is used for conferences and meetings, and is also the site of many Art Department guest lectures and Department of Theatre and Dance choreography/movement classes and rehearsals.

The space features a functional kitchen, which is used primarily by catering staff now. However, the club used to serve daily weekday lunches to mostly faculty and guests in the 70s and 80s, when it was aptly named the Faculty Club. As lunchtime faculty diners dwindled, the university changed the club's name and opened its doors to the entire campus. Revenues continued to decline, until the club stopped serving daily lunches and focused more on conferences and events in the late 90s/early 00s.

View of the U Club from the west, facing east.