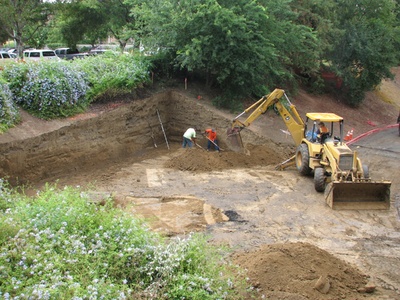 Construction east of Physics and Geology during Summer 2007

Being a valued institution of research and education, the University of California, Davis is in a state of constant change and flux. Indeed, some say UCD stands for Under Construction Daily. University construction is guided by the 2003 Long Range Development Plan, which outlines how the university plans to grow between 2003 and 2016. According to this document, the total on-campus population could possibly grow to approximately 51,695 by the end of the '15-'16 academic year. Constructing new buildings and renovating old ones is critical to providing enough space for all these new people.

Campus construction comes with a cost to students, faculty, and staff: Closed Bike Paths, closed parking lots, detours and alternate routes. To keep explorers of the university informed of this fact, the kind fellows in its administration often feel it necessary to erect gigantic colorful signs in front of future construction projects. These signs are so distinctive that there was even a parody of them created by artist Steve Lambert.

These signs generally include a brief description of the widget to be built, along with a dollar figure of how much the project is costing the university (at least, how much it cost at the time they put down the sign). Sometimes they even have sassy concept art. Though many of the signs advertise a web site (http://growthplanning.ucdavis.edu) with news articles related to campus growth, this site gives neither any indication of how many construction projects are currently going on, nor even how many of these delightful signs have been placed. No one has stepped up to fill this void... until now. 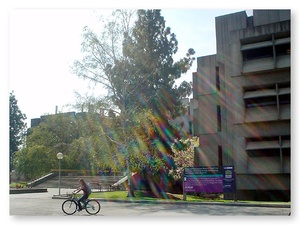 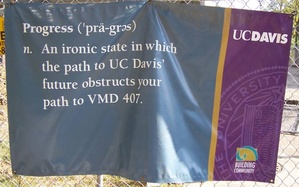 West and Southwest of Campus: 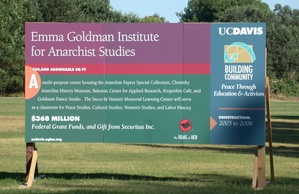 The UC Davis Design and Construction Management web site contains various technical specs on current projects, like projected milestone dates and information on the companies involved in each project. They also provide a colorful map of current campus projects.

I have the following complaints about the Davis Campus: (1) The single worst thing is the absolute absence of overall design and planning. Hardly any buildings actually match each other architecturally and you end up with a grab-bag of funky buildings plopped right next to each other. (2) The Campus needs to consolidate instead of continually sprawling outward. (3)This one really isn't the designers/architects fault, but it would have been cool to incorporate some natural area like the arboretum running through campus in between the buildings. -JamesDawe

2005-04-13 08:22:35   I didn't phrase that very clearly... the plan is to grow campus around Putah Creek, so that in the future it will become more central to campus. Campus looked at where it could accommodate further growth for labs, classrooms, etc. and that seemed to be an appropriate direction. So UC Davis actually is going through a planned period of growth despite it's apparent failure to do so in the past. —AlphaDog

2005-04-13 08:27:32   Oh, if you're interested in following campus' long range development plan [lrdp], bookmark its office of resource management & planning; as such a large entity that impacts so many individuals and agencies, campus can't really make any significant moves without public hearings, so everything gets presented online, at Davis city council meetings, and in general public hearings and open planning sessions. —AlphaDog

2005-09-20 17:36:01   My problem with the campus is that it's arranged so chaotically. I came here from UC Irvine, where each academic unit (like Physical Sciences, Engineering, Social Sciences, etc.) has its own well-defined part of campus and individual plaza. There's a good map at http://www.uci.edu/campusmaps.shtml. The lack of logical building grouping here is probably my biggest annoyance. Maybe UCI is just unusually well-planned, though. —RoyWright

2008-07-23 17:15:04   There is a large amount of construction of nice, new buildings on campus. Does this impact the ability of the university to pay professors, grad students, and other researchers? How are these buildings funded? —IDoNotExist

2012-04-12 10:57:08   Former UCD student now at UCI for graduate work with an opinion on the comments that said it would be nice to have the Putah creek run through the center of campus and another on how the buildings are haphazardly planned. Well here at UCI everything is planned and we have a giant park in the middle and it sucks. The park divides the campus and separates the departments even more. It's also unnecessarily far to walk between places. Putah creek was a great place to chill during the day because it doesn't get a mad rush of people constantly trouncing through whenever it's the ten minutes between classes the way a park in the center of campus does. The corporate like planning has left the campus with a sterile feel, lacking the character that the diversity of the buildings at davis give. Think, "I go to school in a shopping mall," and you get the picture. —michael101

2013-07-25 23:46:21   I don't really mind how the buildings don't match. At least not all of them are ugly. And it'd be terrible if they all were matching with that new design style that makes everyone want to vomit up their stomachs. Example: Segundo dining commons and Giedt Hall. "Ehhh, we're post milennial, look at us, mehhh." Both kind of nice at first, but as you see them more often, nauseating. Kerr Hall is one of my favorites. So is Sproul Hall. I also love Kleiber Hall and the one to the right of it, Kleiber just because underground = amazing.

Anyway, I'm digressing from the original point I was going to make which was that it would be kind of nice if there was more of a central feel to campus. I'm more used to it now, but the other day I was thinking about how a gigantic tower somewhere in the middle would be super awesome. I was daydreaming as usual and thought that it'd be a case of function-after-form, some science majors would have to come up with reasoning that the existence of such a building would make sense.. but wouldn't it be cool if there was a huge spire that you could see from practically anywhere on campus? It could be anything from a clock tower to an obelisk to a gleaming metal spike. Or there could be the UCD logo on it! When you ride your bike to school through endless disgusting apartment complexes and then the first thing you see is the somewhat fugly Segundo dorms, it doesn't inspire much school spirit.

The tower/spire could be in the center of the Quad (since that is kind of what I regard as the center of campus, even though it isn't), or it could be somewhere else, such as the roundabout by the Silo. I don't think it particularly matters how large (diameter) it is, just as long as it's super duper tall.