Unbeknownst to most students, there is a barber shop in the MU basement! (among other things). Go to the bowling alley and take the corridor to the far left of the lanes back, then turn right and you will find yourself at the University Haircutters. The barber shop only cuts male hair, so if you're a girl check our page of Hair Salons and Barber Shops to find out where to get your do groomed in Davis. It has been this way since David Johnson left, who was the last employee to cut both gender's hair. 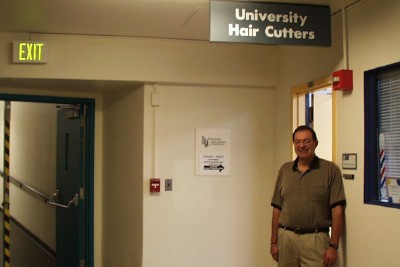 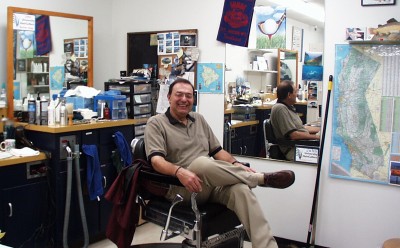 Call ahead for reservations. Walk-ins are possible, but John Salido, the proprietor, is usually pretty booked. John is knowledgeable in just about everything but is in the upper echelon of barbering in that he doesn't make you feel uncomfortable if you don't want to engage in small talk whilst getting your mohawk tightened up.

In addition to being a craftsman and artist with regard to his job, John is also an amazing source of information about the campus. He's also quite an expert fly fisherman who led trips and fly tying classes through Outdoor Adventures for many years. John is a retired Command Sergeant Major and gives discounts to ROTC students, or so I've heard.

Those ROTC haircuts can be tough. Bzzzzzzzz.... - arlen

From a time when John had five barbers employed under him and the row of chairs stretched through to the end of the hall (before being taken over for the The California Aggie's archives), the barber shop is now manned by just John himself. He says that the other barbers were driven away by the high cost of living in Davis and the lack of parking around campus. When residential parking nearby required permits, the barbers (who commuted to Davis) couldn't get to work without greater expense of parking permits. John is one of the few departments on campus that are not University-related and as such actually pays a property tax on his location.

John only plans on staying until his contract is up in 2009, after which he and his facility will disappear. He will retire to Hawaii with his wife at that time to match her retirement. He loves his work and frequently considers staying for longer due to the great people, but will not likely be swayed.

— Update: Jan 2009, John conveyed to me that other people have been interested in taking over his business but the University Administration has yet to determine what they want to do with the space that his facility occupies. Perhaps it's time that loyal customer's voiced their opinion?

How would you describe your University Haircutters experience?

Funny you should say that (whomever wrote the above), because I DO always use the University Haircutters for my mohawkin needs.. he'll even give you mohawk maintenance advice (don't use conditioner, etc..). —KrisFricke

2005-06-23 21:45:07   I first went to this shop to get my hair cut two years ago, but I didn't realize that barbar shops are primarily for mens hair. Thankfully, John trimmed my hair anyway and was pretty interesting to talk to. I went there twice and he charged me only 8 dollars each time. I would go back but now I'm too self conscious. —JenniferChu

2007-03-07 23:38:25   I went to the barber shop in the MU today... they didn't make me schedule an appointment or anything, just cut it right then and there!! Inexpensive, looks perfect, and these guys love their job!! I think the conversations alone were worth the $12 (hence the tip). I'll definitely go again!! —TristanRozzze

2008-01-31 21:34:18   I cant believe I had never gone there before. Since Ive been in Davis, Ive been going to one place after another paying too much and getting my hair mangled. Yesterday I walked in, he doesn't take walk-ins so he set me up for today. He is very fast and really good at it. It makes sense considering hes been at it for 39 years. Don't waste your time or money anywhere else. —thefox

2008-06-04 23:22:33   I got a haircut from John today and I must say that it was a lot better than I expected. He seems to care more about the people than the money. He is a very nice guy who is good at what he does, and I recommend everyone try him at least once. —hjin

2008-06-06 12:48:33   Good conversations. Apart from being a former soldier, John told me he's taking Law classes, and it was interesting to hear his perspective on Mr. Bush. —JoFeuerstein

2009-04-22 15:11:23   I went in to try a phohawk haircut and he was great. Really professional and took his time. Gave me a good deal on gel to boot. I'm just sad that he will be retiring soon. So if you get a chance get a haircut here while you still can. If you call you can make an appointment. —techguy201