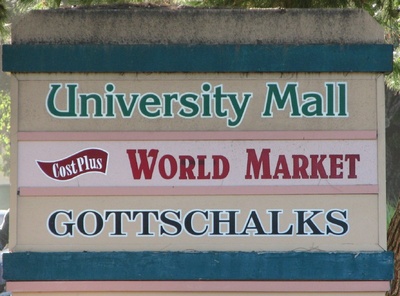 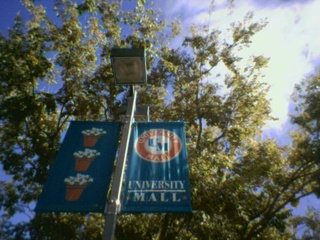 University Mall (also known as U-Mall) is home to the following businesses:

In front of the mall is an AM/PM and an ATM island for Bank of America. Rite Aid is across Anderson Road to the east. You will usually find an ambulance in the mall's parking lot, idling away (presumably The Graduate is a lucrative source).

Sometimes at night you can see swarms of bats feeding on insects drawn by the lights of the parking lot. Crows are a nuisance during the fall and winter twilight hours. It's a little reminiscent of The Birds, with loud cawing and hundreds of crows swarming about and perching on bare tree branches. The sight of their flocks, darkening the sky as they move in unison is quite spectacular. Segundo residents likely are treated to the sight of the same flocks, as the U-Mall birds go in their direction at times. Be sure to move your car before sunset or it will be covered in droppings, although the number of circling crows has been reduced with the addition of an electronic speaker mounted on the buildings producing owl calls 24 hours a day. In the late 90s, the speakers used to play predatory hawk sounds.

According to the city, the property has 427 parking spaces. Because of the proximity to Segundo and Cuarto dorms, freshmen tend to park in the UMall if there is no street parking available. This is a risk to anyone who parks at the UMall overnight because cars have been towed in the middle of the night and the cost to get a car back is over $300.

The original building permits for the mall were issued in 1965. University Mall first opened in 1966. In 1970, the mall added a 20,000 square foot retail space for Lawrence's, a department store. This space later became a Pay n' Save, then a Payless, and finally a Rite Aid drugstore (Rite Aid bought Thifty Payless Holdings, Inc. in 1998). Sometime in the 1970s, The Graduate was built. In 1984, the west wing of the center was built to house Safeway. In 1997, Safeway moved out and State Market's Harvest moved in, vacating its former location across the street. Also in 1997, the mall was sold to M&H Realty Partners for $7.4 million. It was formerly owned by several pension funds.

In 1999, the mall underwent major renovations, with many of the smaller longtime stores being displaced. Some, such as Fluffy Donuts moved to the east end of the mall while others such as Nation's Giant Hamburger were permanently displaced. During this renovation, Rite Aid moved to its present location across the street (where State Markets Harvest had previously moved out). The former Payless space in the mall was enlarged to 36,000 square feet by swallowing up some of the smaller stores and leased to Gottschalks. State Markets Harvest unfortunately did not last. It closed in the Fall of 2002. After much debate about losing a neighborhood grocer, its 20,000 square foot space was leased to Cost Plus World Market in 2003. At the same time, the city gave clearance for Gottschalks to expand to 39,000 square feet by taking over the west entrance hallway, although this option was not exercised. Later in 2003, the mall was sold to Centro-Watt, an Australian real estate firm. The Sprint Store location was previously occupied by a GameStop. That location was previously occupied by a Parrot Cellular operated Cingular Wireless store which was originally a Parrot Cellular operated Pacific Bell Wireless store. The Davis Imaging Building was previously occupied by The Wherehouse until 2000. After The Wherehouse closed, it was briefly occupied by a Rubio's.

The mall was in the news frequently in 2006 regarding whether Trader Joe's could take the spot leased by Radiological Associates of Sacramento to build a 12,000 square foot food store. In 2007, there was some controversy when the mall's management kicked out Teriyaki Express, a local restaurant, to make way for Ohana Hawaiian BBQ, a corporate chain. In 2009, the Gottschalks chain declared bankruptcy and announced the store's impending closure.1234 Forever 21 signed a lease and moved into the former Gottschalk's space in April 2011.

UC Davis's Division of Social Sciences leased office space above La Esperanza from about 2005 through December, 2009. The office space was used mostly by graduate students in the departments of Economics, History, Music, Sociology, and Spanish.

Trader Joe's was constructed on the site of the former Radiological Associates of Sacramento space in the University Mall parking lot. The new store opened in October 2010. 56

You may also be looking for other Shopping Centers or Malls.

They are currently owned by New York based Centro Properties Group, the nation's second-largest owner of community shopping centers with about 600 properties in 39 states.

Previous Comments: This mall would be a terrible place for Trader Joes. The mall is already suffering from a lack of parking. The parking lot is always covered in bird poop and if you park your car there for more than 5 minutes, your car will be covered in it too. Not an "appetizing" location. Trader Joe's should look to the Davis Manor Mall for a location.

Teriyaki Express shut down due to an increase in the amount charged for monthly rent. A hawaiian bbq will soon open in its place.

2007-10-13 13:28:39   Additional info on the towing in this parking lot: Jed's towing service tows cars to their lot in Dixon, so it might not be convenient to get your car back. The fees are as follows: $150 for towing, $40 a day for storage, and $75 for after hours pickup to have somebody go down to the shop and get you your car back (they are closed on weekends, so there is a good chance you'll have to fork out this fee). On the plus side they were pleasant to deal with, I just hope to never have to business with them again. —JayJ

2008-09-27 10:23:41   So I spend the whole day at U mall the other day. I was there around 9am and got myself some coffee and treats. Went inside to done some shopping at the department store, and spend the whole afternoon at the old tea house for lunch and tea. And I bought some cookie and drinks from the world mart. And guess what, when I walked out to my car around 6pm, there is this orange paper on my windshield saying that I am parking there illegally, they have noted my plate number and they will tow my car the next offense. Now I am confused. Is it not a parking lot for costumers? Am I not a costumer? Am I not spending money at the store? I mean really? It not like I left my car there overnight. Anyway, I guess I would just not go there anymore, I am sure there vendors would appreciate empty lots way more than actual paying costumers. *sight* —HellenT

2011-04-04 00:01:31   I love the U-Mall but I hate finding parking (especially since the addition of Trader Joe's and now Forever 21). I like going to Sugar Plum, but sometimes I just skip it because of lack of parking. I know people say "take the bus" or just "walk," but as someone from West Davis is this is a little unrealistic for me. Wish there was more room for everyone to park so I could show my love to the U-Mall more often! :( —Morganna

2011-08-04 14:59:37   They used to have a few video games inside the door, right outside Safeway. Went to Fluffy's to get sugared up after soccer games, then spent (too many) hours throwing away money on "Gorf" and "Donkey Kong". I believe this was the only place in West Davis (west of LaRue/Anderson) that had video games back in the 80's. —OldDavis73

They haven't changed much in the past 10, dunno about 20 :) —TomGarberson

2012-08-27 16:29:30   The information on when the Safeway Store was there is wrong. It was definitely there in 1975. In that same Mall was The Game Room and across from that (inside) was the Back Home Delicatessen. The last 2 were owned/ran by Ray Coleman. Jack Oldham owned the Chico and Davis Graduate. In the same time period, there was a coffee shop on the east end of the Mall. One of the waitresses who worked at Nations Giant Hamburger drew a beautiful Mural on the east wall of the hamburger shop. She was a tall, attractive brunette lady. I lived for 2 yrs at the Wakeforest Apts, then, at the Fandango Apts. Those were the daze! —rastamon