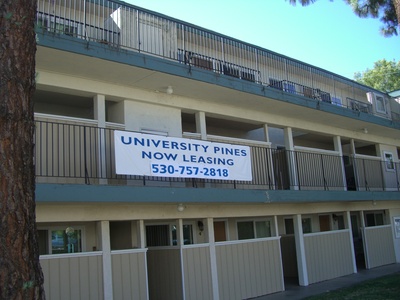 The view from F Street

Prior to their 2008 change in management to Dowling Properties, these were "The Kingston Apartments." In September 2010 Zabace Property Management took over the management of the property (the previous manager was Dowling Properties). The new management will continue the remodeling and improving the complex. They've replaced both roofs, done some landscaping (with more to come) and replaced all the old windows with new double pane windows. 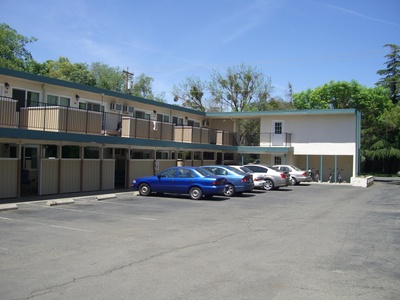 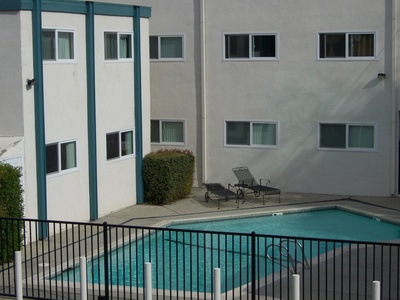 2005-11-12 02:32:00   these aparments are small, but the layout is interesting. the front door looks like a back door with a sliding glass door and screen. but very cozy and nice location and price. —MichelleAccurso

2006-08-26 23:11:13   The apartments are old, and do not look as good as that in pictures. In the early morning, the truck collecting garbages makes loud noises which can definitely wake you up. The roof of the top floor leaks rain water, and it is never completely fixed. The heater in my apartment is broken, and it is like living in the hell during winter time. The bedrooms of the apartment are facing west, which means that the bedrooms get a lot of sun shine in the summer afternoons (leading to high temperature). If you happen to live on the top floor, you will be living in an oven. The air conditioner lowers the room temperature a little bit, but it is at the cost of your electricity bill. Considering the environment of this place, the rent for the two badrooms (900.00 to 925.00) is not good at all. With a little bit more, you can find a much better place to stay. I agree with NekraKil that you'd better stay away from this place unless you have absolutely no choice left. —DumbCrab

2009-01-23 21:51:52   I visited these apartments in hopes of staying there for next fall. After seeing everything, me and my future roommates (4 of us) decided the 3 bedroom was not big enough for us. While approaching the place, its quite understandable why the rent is so cheap, because it looks like its extremely old and poorly maintained. We spoke to the new landlord (Kevin) for a while, and he seemed like an extremely helpful, ambitious, courteous, and understandable guy. If I was living with only two other roommates, then I would have signed the lease. Despite the outside look, Kevin has had people coming in and constantly renovating the entire complex. The story was that his father owned the place, and Kevin admitted that he didn't do much to make it nice. Now, Kevin has moved his family out to Davis and is genuinely doing everything he can to make the place better. (I knew his story and ambition were legitimate because he greeted us with work gloves and a good number of the rooms were being painted or receiving new carpet) The rooms themselves have brand new carpet, and windows. Gradually, they are going to get new doors, and an upgrade on the outside as well with glass bricks bordering the building, which should help this places curb appeal significantly. There are massive closets in the units, and the rooms seem larger than they are due to the newly installed sliding mirror-closet doors. If someone was considering living here, I would encourage it as it would be a fantastic investment for the future. The price is right (3 bdrm for $1,200!), the location is perfect, the landlord is personable, and in a few years, this place has the potential to double in price. I'm sure I'm merely the first of a massive revival of positive ratings on this place as well. —Yiddo9

2010-03-12 18:13:30   There’s a reason this place always has several vacancies year-round while most other apt complexes in Davis are sold out even before the school year starts…it’s because the only good thing about this place is that its ‘cheaper’ per month then the rest, but it comes at a price. Between Kevin (the owner/landlord) and Dowling Properties (the management company) it was nothing but a constant headache; especially when anything went wrong, and believe me there was plenty that did. Our place was ‘freshly renovated’ but you could really tell that everything was only made to appear nice but in reality was of very poor quality and often had/created issues. When something seems too good to be true, it often is, and this place is no exception. —longboardlover

2011-03-16 15:32:30   Been going by and checking on things every once in a while. It would appear they are genuinely trying to improve this apartment complex somewhat. It is kept clean and, by all appearances, seems to be in a much better state overall.

While I cannot speak on every single modification that has been made, the improvements I do see are many:

New gates/fencing on the units. New paint. Well maintained parking areas. New doors and windows. Clean pool area (tough to pull off this time of year.) Garbage area is clean and well-maintained (which it never was while I was a resident). Speaking to one of the tenants I saw on a pass through the maintenance problems he has had were dealt with professionally and in a timely manner. Mail area is in good repair. New Patio lighting fixtures.

In all fairness, it would appear they are doing everything in their power to make this not only habitable, but also enjoyable. Might not actually be a bad place to rent if you are currently looking. I know that Kevin is a nice enough individual and it appears he is holding to his word and making every possible improvement he is able to.

Kudos to University Pines Apartments for this.

Things that still need to be done (that can be seen):

New side-boards on all levels of walkways. They still appear old and in disrepair. A bit more landscaping, just for appearance sake. New extinguisher boxes are needed. Not sure on what repairs need doing in the individual units, but the gentleman I spke with let me peek inside and it seemed as if it was also much improved over what it was previously.

2011-12-31 14:44:42   These apartments are older, but they are by far the best apartments in Davis (at this price range). It is true that there are a few improvements that need to be made, but the management is by far the most honest and prompt. Kevin is very nice and will help with any maintenance problems at the drop of a hat. Kevin told me that rent will be reduced this season due to fee hikes and the bad economy. Talk about awesome!

The price, management, and location all make up for the age of this complex. If i ever move back to Davis I will be looking to live in University Pines!