UCSA, the UC Student Association, is the official voice for all UC graduate and undergraduate student governments. In the past, ASUCD and the Graduate Student Association were members of UCSA. ASUCD left in Spring 2006 and GSA left in Fall of 2007, both claiming that the organization had major organizational problems and that they were ineffective at lobbying. The Law Students Association has never been a member.

In June 2009, ASUCLA GSA voted 11-1 to leave UCSA. In Spring 2010, they will have a ballot referendum to eliminate all mandatory UCSA fees.

Before leaving in 2006, ASUCD contributed about $26,000 a year to be a member of UCSA. However, some Senators and students still think that they do not care about UC Davis and are doing a bad job representing undergraduates and graduate students.

UCSA wants you to contribute your story at the UCSA Blog! 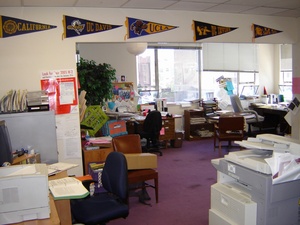 UCSA's Oakland Office, which sorta overlooks Lake Merritt, in 2005. I'm sure they've taken that UCD pennant down by now. UCSA organized a "March to Stop the Fee Hike" rally at UC Berkeley for November 17th, 2005 in reaction to the proposed fee hike the UC Regents were going to pass. However, the Regents, as was noted on their schedule, voted to pass the fee hike on the 16th. Some see this as an example of UCSA not knowing what they are doing. They also put in a lot of work to get the UC Regents to divest from Sudan.

UCSA intends to ask ASUCD for a $3,000 increase in their fees. The UCSA representative cancelled intended visits for three straight weeks until they finally appeared two weeks before budget hearings.

UCSA appoints students to UC system wide committees which advise the UC Regents and Academic Senate. They also are involved in the second stage of interviews for the student regent position. The University Office of the President (UCOP) narrows the applicants down to ten and then UCSA narrows that pool down to 3, which then go on to be interviewed by the regents. UCSA successfully advocated for the creation of the student regent position.

On June 25th the UCSA Board of Directors passed a resolution 11-0-0 allowing ASUCD to retain its voting rights through Spring 2007.

On July 16th, graduate student BrentLaabs was elected and subsequently appointed to the position of Chair of the Board of Directors of UCSA. Chairman Laabs represents the UC Davis Graduate Student Association (GSA). However, he was asked to resign by the Executive Committee on October 14th, 2006, first in private, and then in public the following day. After some discussion and a vote of no confidence, he resigned the UCSA Chair position.

On October 12th, 2006, the ASUCD decided to not fully fund UCSA in the budget, UC Davis may no longer be a member in good standing with the UCSA. Reaction to a later resolution formally dissociating ASUCD from UCSA was interesting:

Matt [Shannon] from UC Davis has come to speak about UC Davis. Matt's come to discuss working together to affirm notion for the summer. Ahnika [Kline] asks about the last BIRT [be it resolved that] which discusses distribution and the motivation about passing out the resolution to different state legislature. Ahnika says she is worried about working together when the resolution is set out to negatively impact UCSA. Matt responds that it was passed as amended and they felt it was important to distribute. Ahnika asked about the possibility of amending it and they said it was already passed. Doug [Jorgenson] asked about getting a member of UCD AS on the steering committee for Lobby Day. Matt responded that this seems like a possibility. Tina asked about why payment wasn’t there, and Matt said they can’t pay if they aren’t in good standing and that contract is not valid because Mark Champagne couldn’t sign. Cindy asked about Mark’s role at UCDavis Senate. Matt says he is the business director. Bill [Shiebler] asks President [Holloway] to contact him. Matt responds to letter sent by UCSA saying that money has been reallocated, so UCSA won’t be getting payment. Bill says, regardless of financial situation, if Matt could ask president to contact him. Matt agrees to do this. Peter [Tittmann] thanks them for coming and says it is a good effort. Cindy [Mosqueda] is concerned that a good faith effort hasn’t been made. Matt claims that he’s only one person, and he said he tried to have the vote when UCSA Staff were already present on campus. The feeling at Davis was that they should not be paying UCSA 29k. Cindy is concerned that no communication with UCSA is a lack of professionalism. Matt hopes that these grievances in the resolution will change and that eventually UCD can be part of UCSA again. Oiyan [Poon] asks to clarify what working together means. Matt claims that keeping informed is part of it, and trying to work together despite our different relationship. (sic)

Throughout the 2006-2007 school year, Graduate Student Association representative Peter Tittmann attempted to work through differences with UCSA, proposing things such as a graduate student-oriented action agenda item and bylaw reforms. ASUCD had supported the grad issue in 2006 (non-resident tuition), since they thought the campaign was actually winnable.

At the UCSA Congress in July 2007, the GSA attended UCSA Congress. Newly elected GSA Chair James Hodgson and External Chair Brent Laabs went to survey the progress. Little had changed in attitude and the way in which the meetings were run. Undergrads outvoted graduate students in determining the graduate action agenda. A candidate for a minor UCSA office was singled out because she had said, "I think the conference is a little too centered on diversity issues," and many expressed concern about her fitness for office. And finally, while the UC Regents were indoors deciding the fate of fees and programs, UCSA was outside protesting to a wall where no regent could hear.

On Wednesday October 3, 2007, the GSA Assembly voted to leave UCSA 38-3-3, as a result of their continuing unsatisfactory experience. This was not without some controversy — Tom Aguilar in particular had felt that Peter had made some form of commitment to help reform UCSA the prior year, and that GSA was in effect abandoning its promise. James and particularly Brent were of the opinion that given the history of the UCSA, any attempts at reform would be unsuccessful and there would be no use investing in sunk costs. Whether for good or ill, GSA voted to leave, and Davis became the first campus since 1994 to be completely unrepresented by UCSA.

The GSA Wiki has a ton of information about UCSA, including a 17-page-long report about the history of UCSA.

As of September 2008, ASUCD boasts a strong Lobby Corps, a new University Affairs Office, and the sense that leaving UCSA has revitalized ASUCD's advocacy programs. GSA has joined the student-run National Association of Graduate-Professional Students, and holds three seats on their 15-seat Board of Directors.

2008-08-17 01:09:45   Why does the ASUCD have the biggest budget of any student organization in the nation? It even has the largest spirit organization in the nation (Aggie Pack). I would have thought an Ivy League school would have the nation's biggest budget. I couldn't believe this when I was reading though daviswiki. The more research I do, the more Davis sticks out. Why is UC Davis so unusually special compared to all the other UC's?

Even the other UC campuses have Wikis, but they are either very inactive or are nonexistent. Davis seems to have the largest database, and most activity. Can someone fill me in? —ThanhVu