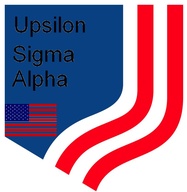 Upsilon Sigma Alpha claimed to be a pro-American, media oriented, co-ed Davis Honor Society. It was unofficially established in April of 2007 and became a SPAC organization in May of 2007. They are not a member of any established honor society association, rather they seek to become an inter-honor society association. A sister honor society has begun filing paperwork to become official as well. They are also working on starting a chapter at San Diego State University. Upsilon Sigma Alpha members say that they will never use illegal or controlled substances during their events or functions.

It was part of Steve Ostrowski's empire.

Their motto is: "We're a REAL organization."

Our mission is to provide fun and entertainment to those loyal to the spirit of America. We have laser tag outings, bowling, movie nights, anti-prohibition celebrations, and we allow members to advise the Board of Directors on the running of this great honor society.

The main activities of Upsilon Sigma Alpha are recreation, political activity, participation in media, and discussions of the trials and tribulations that come with trying to be principaled while working towards positive change. They encourage political diversity in the group.

They will be rushing (allowing prospective members to consider joining) throughout the 2007-2008 UCD school year. The charge for joining USA is one American quarter. They have no established location, meeting on campus and in town. They are a co-ed honor society.

The Brothers and Sisters of the Upsilon Sigma Alpha honor society had a special buffet lunch at the great wall of china II in Davis. "We'll meet there around 12:30 pm on Saturday, December 8, 2007 , though the approximate time has not been decided yet. We'll be discussing the importance of Charity, and celebrating our members' accomplishments over the past quarter."

The Davis Defender will be an AS PAPERS publication featuring endorsement-like statements of ASUCD candidates, biographaphical profiles of the Board of Directors, society activities, and detailed descriptions of the Upsilon Sigma Alpha way of life. It will be a four or six page newspaper in the same style as the Davis Enforcer.

The Unknown One The Anonymous One

I never pledged anything. —GregWebb

Or, if you can't do fantasy football, how about Fantasy Congress? —MaxMikalonis

Do we need to have a meeting in that part of campus, Ron? That's awfully late for a friday.-The Unknown Sage