Urban Art (usually in the form of graffiti) means "unsanctioned art", as opposed to officially sanctioned art. Also called 'street art', it does not mean that one is of higher quality, or even necessitate a different style. Urban art is often created under duress which sanctioned/approved art is not, and this constrains it. It is guerrilla art. Urban art is, however, free of any censorship, commercialism, and community mores which establishment art must hew to. This liberates it and makes it uncompromised; it is "pure art".

Unsanctioned street performances such as those of flashmobs and the Ku Klux Klown could also be considered urban art.

Knitta, also known as Urban Knitting (or knitted graffiti), is knitted yarn done in public places over public objects. There is one piece done on a bike rack in front of Hart Hall. Here are more examples (note what happens when a bicycle gets attacked): http://www.crookedbrains.net/2009/01/knitting.html

Not all posters and Fliers are unsanctioned, but these are noncommercial, uncensored and artful. 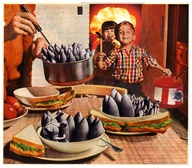 State of the Homeland, posted in Delta bathroom

Driving is Bad for your Ass, posted @ Delta

I'm so glad we fucking evolved, posted @ focus your art

Do you suffer from Affluenza?

The Immaculate Invasion of Iraq, posted outside delta

Protest poster for the war in Lebanon and music show. Read the small print 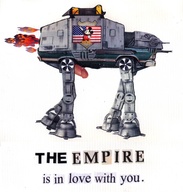 The empire is in love with you, posted at Focus your Art

Poster for Utah Phillips at the Varsity

OBEY Cow at The Marketplace

Have you seen this squirrel?

Have you seen this crow?

Gavin the Garbage Can

Another work signed by Flash. 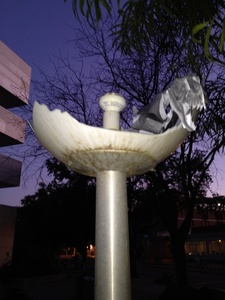 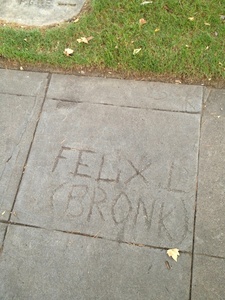 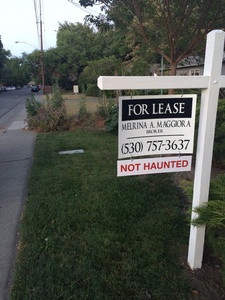 The bridge under the I-80/Highway 113 interchange over Putah Creek used to be a very famous graffiti spot until about 4 years ago. You can access it by heading out towards the Hydraulics Lab south of the Vet hospital and Unitrans depot. It is also south of the Center for Aquatic Biology and Aquaculture (CABA). Local writers DEOne, SteveOne, Dawns, Erekt, Phlower, Bfore, and even such SF artists as Giant, Bukue, SetOne, and Leks and others used to kill the walls out there every weekend, drink beer, build skate ramps, blast metal, and generally have a good time. You can see most of this work documented on Susan Farell's site graffiti.org. This was all fun and games until an alert CHP officer saw me painting in the middle of the day and pulled his gun on me. Graffiti spot no longer. All the walls have been sandblasted.... :( —(Mr. JeffSpeckles aka SteveOne SBS HNR, freight train killer 1996-2005 and beyond)

For an ever changing display of graffiti, head over to the train tracks along 2nd Street near the Police Station. The freight trains there park for a while, displaying many vast murals of well executed graffiti art. Of course, where there is good work, there is also bad, but typically one can spot many multicolored banners mixed in with the typical tags.

Photo Request: There is some nice graffiti on an old trailer next to the Davis Park and Ride parking lot behind Ikedas. I saw it one day when I didn't have my camera and I haven't had a chance to make it back. Anyone?

This is painted on the remains of a building foundation in the UC Davis Arboretum.

Under the bike bridge at the worst intersection 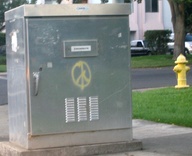 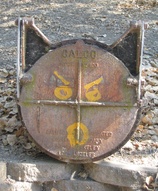 This meanie face is in the Arboretum.

On Colgate Dr. between L and M streets. 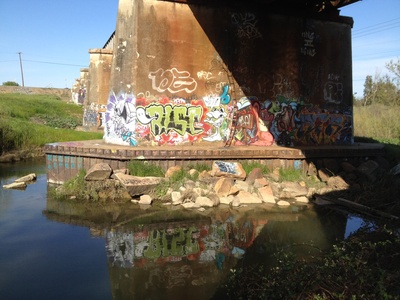 This is the Southwest side of that trailer, I didn't get a look at the other side.

On the sidewalk east of Natsoulas Gallery April 2007 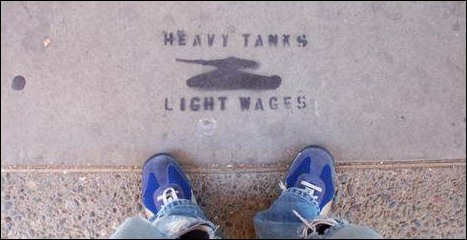 There seems to be a series of stencils in Davis produced by the same group or at least in a very similar style. They have been found all around town, including on Campus and the part of Downtown closest to Campus.

California Aggie columnist Ian Watson ranted about these stencils, especially because one appeared on the Death Star. It is rumored that many of these stencils are painted by the International Socialist Organization. The others in the series are: 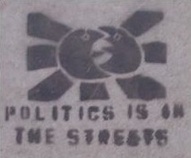 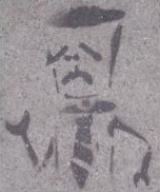 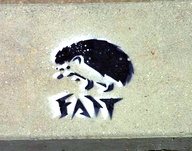 Is this associated with the design department? These were all over campus at some point. 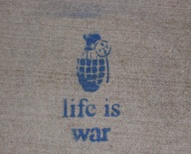 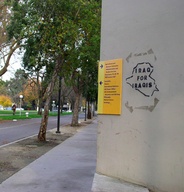 This stencil was found on the side of the Death Star on 11-15-2004. It is in the same style as the other political stencils from the summer of 2004. There were 2 other new stencils (no pictures of those yet), also obviously by the same group/individual

Found by the Alpha Chi Omega house on Second Street

John and Bob are found in the Senda Nueva Greenbelt where Antelope Ave cuts in (3/13/05). John and Bob can also be found twice on the DHS campus, although one stencil has been shoddily painted over.

Found under the bridge at California Avenue

Found on WC door in the Arboretum's Wyatt Deck.

Found on 3rd Street across from Raja's

Found on a trashcan in the Big Kid's Park

Inside the Memorial Union bus terminal.

At the fifth and sixth floors of the northeast tower of the Death Star. Interesting that these are among the highest-elevated, least-trafficked open ledges in Davis...

on the underside of the old A Street bridge

At the corner of Third & University. 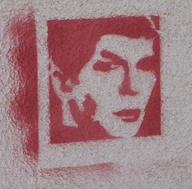 A hilarious stencil of Mr. Spock on a pillar outside of the Student Housing building

Just outside the main entrance to the UCD Art Building

On the side of the Theatre and Dance building

Another view of Mr. Spock

Clouds drawn on the west doors of the Art Building

Outside of the L&S Dean's office in the Death Star

Stepping stone at the south-west facet of Delta of Venus

between Olson and Shields

Found next to Ali Baba.

Also found next to Ali Baba; the barcodes were stamped in 2004 according to the archive above, but the Critical Mass stamps are from '06.

Located across from Sam's Mediterranean.

Across from 194 Chem and Everson Hall on the Spanish tile-roofed building's wall.

In front of Mansion Square, this stencil is identical to one near Sam's Mediterranean.

The back of one of the design bungalos next to Walker Hall.

Identical to the bird near 194 Chem; this one's near the Art Building.

I'm a ninja, not a terrorist painted under Mrak Hall bridge.

Same bird stencil as above, this series is between Voorhies and South Hall. 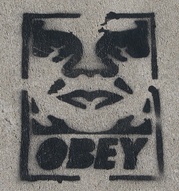 On concrete of basketball court at Willowcreek Park

Lowest level of the Social Sciences and Humanities Building

Stencil of the Dalai Lama on the roof of the buildings between Walker Hall and Everson Hall.

Same stencil of the Dalai Lama on the roof of Chem 194.

This stencil is located on the sidewalk between the now-defunct Tower Records and the prosperous downtown Starbucks. 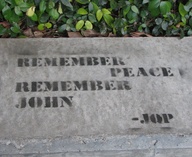 On a planter at the north end of the Wellman Hall front porch. 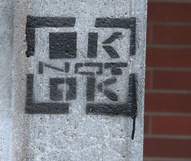 On a pillar in the pit of Wellman Hall.

In Central Park near the play area

There were some nearby spray painted words, but I'm not sure if they go with the Ark, at the far eastern end of the arboretum 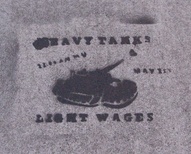 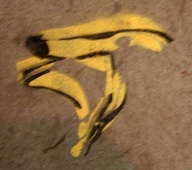 under a bridge in the arboretum

On the sidewalk north of the arboretum and south of Unitrans

next to Newsbeat in the alley 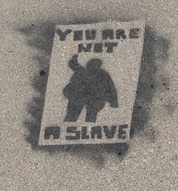 Several on Campus near the MU

On the west side of Wright Hall

Located at the north entrance of Freeborn Hall. Used to read 'Casino Bicycle Parking'...then got painted over by the UC peeps. Photo by ElisaHough.

Outside south entrance to the Silo

On a column of Olson Hall.

On a column of Olson Hall

On the northeast side of Freeborn Hall on a pillar.

Turtles wearing top hats on the back of a rental sign in front of Davis Upholstery.

Across from US Bank.

Behind the SPCA Thrift Store.

Possibly a new work by Flash?

Many of the original stencils are now painted over. The city seems to be using bright silver paint to cover some of them, which makes for some really ugly sidewalk. So what you do is stencil many of them in a pattern so that when they silver paint over them it makes a large face or such.

I hate to be a stickler but the one on the pillar of the art building is actually a silkscreen. You can make the argument that a silkscreen is a stencil but it is not a stencil in the same form as all the other ones on this page. Also, I'm sure there is other Urban Art in this town besides stencils. Maybe someone can contribute some of these other mediums? —GracielaGuardado

2005-07-17 16:58:43   Does anybody have any pictures of the Evangelions that used to be on the Orchard Park Overpass? —NickSchmalenberger

2005-09-12 13:32:00   on the Death Star there's another stencil, a woman's face in a box that looks like it's suppose to house a light to light the floor, i would have taken a picture but we couldn't really stop —MichelleAccurso

2006-01-12 11:44:34   Take the train down to Berkeley and look on the east (and west too) side of the tracks. Between Richmond and Emeryville you will see tons of nice stuff. Graffiti tends to be concentrated around train yards and tracks, construction sites, and freeways in urban areas. —JeffSpeckles

2006-03-04 00:35:27   A neat book to check out is "Graffiti world" by Nicholas Ganz. I like a lot of the character artists in there. I particularly like Kid Acne and Cha. The reason why you see a lot of writing on the trainyards is because trains travel a lot, and therefore provide a wider audience for the writer. —MatthewTom

2007-05-02 16:47:28   I periodically see tags from fairly notable tagging crews on trains in Davis and Woodland. It always impresses me. —BrianTrott

2007-07-10 08:21:00   I don't mean to be too negative or anything, but whoever made the Chuck Norris, Andre the Giant, John Lennon and Bob Marley stencils, needs to get some new material. That shit's majorly cliche. Oh, and we need to put more freehand tagging in this section. Last thing, quit talking about Banksy. That guys like a monolith of talent that overshadows a lot of other great artists. Plus, he's like the Tony Hawk of graffiti. Okay I'm done. —BrianTrott

2011-07-07 13:37:41   the putah creek bike tunnel behind borders has had some pretty lame spray paint stuff on it but there have been some cool paint splatter of different colors that look amazing —JustinYoder

2011-08-23 22:27:07   Maybe stenciling needs its own page. It's barely art and its distracting people from a lot of the awesome crap out there. Like the picture I just posted of someone's graffiti underneath Pedrick Bridge. Take a deep breath and check it out, it's some awe-inspiring stuff. It's got at least two angry owls, Big Bird (possibly a pterodactyl), two Salvador Daliesque elephant/wolf/face/stars, the words sex and ape appearing several times, and a pretty good sized marijuana leaf in the bottom right corner. I get flustered trying to take it all in. And then I think "man, this guy or girl dragged a huge ladder down here to do this." Mind blowing. I think the angry owls represent the dichotomous nature of knowledge. Or the dichotomy of something else. Big Bird seems pretty omnipotent, like a benevolent creator. But then it looks like he has a claw and you have to wonder, "Is that a pterodactyl?" Is it? —MikeyCrews

2011-10-12 20:27:14   Yea I saw some similar designs under the I-80 bridge about a month ago but they had all been blemished with other, less talented people's work. Hopefully the big-bird artist gets back at it soon. —MikeyCrews