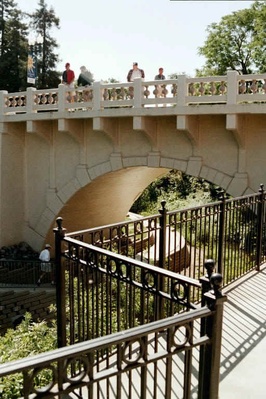 Creekwalk at Andrews Park in Vacaville. In the summer, the creekwalk hosts concerts every Friday evening, weather permitting.

Vacaville is West of Davis on I 80. It is about 12 miles further West than Dixon, 20 miles from Davis. Vacaville has an estimated population of 96,725 as of 2005. It is comparatively larger than Woodland and Dixon; however, much smaller than the greater Sacramento area. Locals (aka Vacavillians) call Vacaville many things: Cow-Town, The Ville, and The Deuce V. It is also often abbreviated as "VV" by locals (similar to neighboring cities Fairfield "FF" and Suisun City "SS"). Because "vaca" is Spanish for cow and ville is Old French for village, a common folk etymology says that Vacaville literally means cow-town. However, it is actually named after the original landowner, Juan Manuel Vaca, similar to "Pennsylvania" not meaning "Forest of Pens", but rather named after William Penn.

Vacaville is home to two prisons: California Medical Facility (CMF, which is famous for housing Charles Manson for a short time) and California State Prison, Solano. Prison labor in Vacaville is used for making fine-ground optics. Psychology of Law classes used to take field trips to the prison in Vacaville. Students got the chance to speak with prisoners and tour the facilities.

It also has many things on the Davis Wish List. The Vacaville Premium Outlets has many name brand stores that sell their overstock items at discounted prices. Other stores within this shopping center, like The Gap, sell clothing/items exclusively made for their outlets. The shopping center also has a Target, Wal-Mart, and both a Sam's Club and Costco. There are many wonderful restaurants like Mel's, an awesome 50's style diner at Nut Tree Parkway. 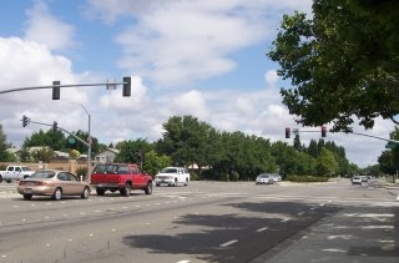 Home of the band Papa Roach, or P. Roach if you're cool. Papa Roach was featured on MTV's short lived show "Coming Home," in which musical groups and bands went back to their hometown to show a film crew around and then perform a live show. Papa Roach's show featured a battle similar to that of the Epic Quad.

Owing to the demographics of Vacaville's visitors, the place is something of a hitchhiker's black hole. If you find yourself trying to hitch out, be prepared for a very long wait. Attempting to walk to Dixon is not a recommended alternative.

Outdoor climbing can be found in Vacaville at the Nut Tree Boulders. Vacaville Ice Sports has 2 ice rinks and is near to the 16 screen Brenden Theatres.

Vacaville was once the home of The Wooz, a giant maze theme park of sorts. Vacaville was also home to the Nut Tree, a general themepark of sorts for which the airport, parkway and road (see photo) are named after. In 2005, it was announced by various media outlets (therefore, considered to be "true") that the Nut Tree theme park would re-open. This rumor has widely been accepted as true after many Vacaville natives noticed heavy construction on Nut Tree Parkway, Leisure Town Road and East Monte Vista Avenue near the Interstate 80 offramp. Apparently, the City of Vacaville had no money to help out recent Alamo Creek flood victims, but finds the funds needed for future tourists to wear and tear along the avenues mentioned earlier. 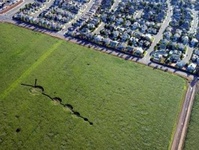 Crop circles found on the outskirts of town. Appeared in the summer of 2003. Was found later to be a hoax by teenagers.

Vacaville has recently made headlines for one of its mothers and sons, Cindy and Casey Sheehan. Cindy started a vigil August 6, 2005 at President Bush's Crawford ranch to protest the Iraq war in which her son, Casey died.

To the east of town is Meridian Road.

2005-06-06 01:39:30   I've only seen a few hitchhikers, the most recent was waiting on an I-80 onramp, but he was in a weird blind spot, I would have totally picked him up had I not almost hit him, plus the line of cars behind me sure wouldn't have appreciated me stopping. Isn't hitchhiking illegal in California anyways? —MichelleAccurso

June 7, 2007: Does the population listed include prison population others that are institutionalized?

I live in Vacaville right now with my partner, a graduate student at UC Davis. There's a lot of big box shopping here and typical restaurant chains. There's not much good original dining to be had like in Davis. The tiny downtown is cute and has some good restaurants and shops, but most of the rest of Vacaville is somewhat run down. The northeast is probably the nicest residential part and the least run down. It's pretty much a typical sprawled-out suburban area. The community is mostly working class and blue collar families, with some military from Travis AFB in Fairfield living on the west side. They live here because it's safer with better schools than Fairfield but not much more expensive. Vacaville is a pretty boring if you're young and don't have kids.

We had a good reason to move here (it's a long, boring, complicated story), but I wouldn't recommend a typical Davis student live in Vacaville just to save money. The housing is easier to rent and doesn't have the crazy competition (we had complexes calling us for months after our visit and begging us to rent) but isn't significantly cheaper. My partner and I are moving to Davis this summer, and we've done the math and found that, with the cost of gas, on-campus parking, and the water sewer trash bill we had to pay on top of rent my partner is only saving about $25 a month living out in Vacaville. That's definitely not worth the hassle of a daily 20-25 min drive. And we're moving into a nicer and fancier apartment (although the same size as our current place in Vacaville) in Davis than what we have now. Had we picked something more modest my partner might've saved money or broken even. If you really want to save money commuting you'll be better off in a place like Woodland.

In summary, come here for the outlets and shopping, but don't live here unless you don't have other options! —bear