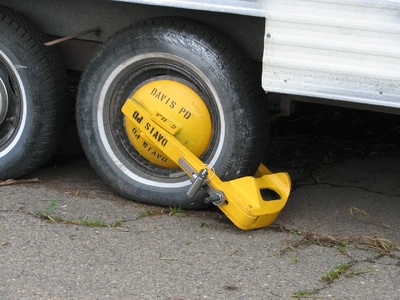 If you fail to pay five (5) or more parking tickets for longer than 21 days you may find yourself subjected to the Vehicle Immobilizer Program of the Davis Police Department. More commonly known as the boot, this device is an alternative to towing, but it will cost you $100 to have it removed. 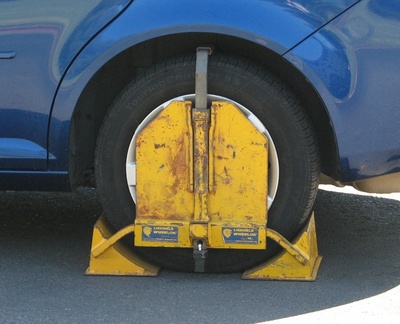 UC Davis, they also have the other kind

2007-07-24 12:33:35   Anyone else see the irony of this thing? The car is illegally parked, yet instead of hauling the car away and immediately resolving the parking issue and freeing the spot, you're going force the car to remain illegally parked until the owner scrapes up $100 + outstanding ticket fines and gets over to the police station (I presume, may be city hall) and pays his/her fines. It would seem that the city is more interested in painlessly (for them) collecting fines than freeing up parking spaces. —GrumpyoldGeek

2008-01-09 12:08:03   For some reason, I seem to always see cars booted (at least near the vicinity of UCD) just before the holidays. What's up with that? On several occassions, I've thought: wow... "Susy Q" thought she was driving home for Thanksgiving/Christmas/New Years. Lesson: if you have several outstanding tickets, and you're trying to get home over some break, leave your car at home in your garage way or in your apartment complex parking lot. —AnnieSirrah

2010-07-15 20:21:50   It may not solve the problem of improper parking, but it usually quickly solves the problem of outstanding parking tickets. Of course, so would a tow, but I think the city gets more of the money this way. —MasonMurray