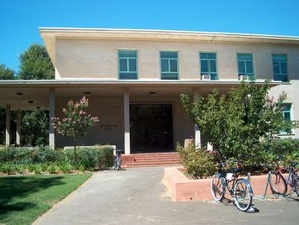 The front of Veihmeyer Hall.

Veihmeyer Hall, (VEIMYR) , home to the Hydrology Program, is located at the intersection of North Quad and California Avenue. There are classes held in a couple of the rooms; however, the majority of the building houses the hydrology program offices and a few labs. It is not the ideal place to hold lectures because the seats are all on the same level (non-tiered seating). If you sit in the back of some rooms your vision of the chalk board can be blocked by the heads of people that are sitting in front of you.

Built in 1949, Veihmeyer is one of the older campus buildings and it has some very unique features. Check out the awkward architecture of the men's bathroom under the stairs, complete with its own shower. In 1962, the building was renamed from the Irrigation Building to Veihmeyer Hall in honor of Frank J. Veihmeyer. Prof. Veihmeyer was UC faculty from 1918 to 1954, and served as chair of the Irrigation department for twenty years.

The men's restroom on the second floor used to have an old couch and several boxes of miscellanea, but have disappeared since the remodeling.

Of primary interest is the fact that a cat named Frank used to live in front of Veihmeyer Hall, likely cared for by those faculty who worked in or around Veihmeyer and were loyal to the feline. Frank was also known for wandering around the area and even entering buildings (such as the Temporary Buildings) and keeping bored students company. Some depraved individual stole Frank's wooden box which forced him to use a cardboard box.

FRANK HAS GONE MISSING! He was last seen on Thursday, May 18, 2006. See Lost Pets for more information.

Direct proof of the cat in question! 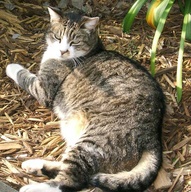 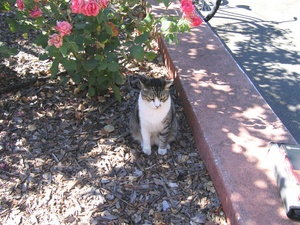 Frank in the Shade. 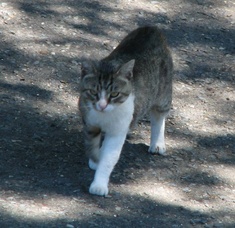 An inverted Frank-impostor lives in the neighborhood of Solano Park apartments.

So have I. However, I determined today that it's not Frank— its front right leg is not white and the pattern on its face is different (although it does have that grey/tan& white combination). I couldn't get a good look today, so I can't say for sure if it's the "Frank-impostor".....the cat was enjoying a bowl of food laid out there though. —il