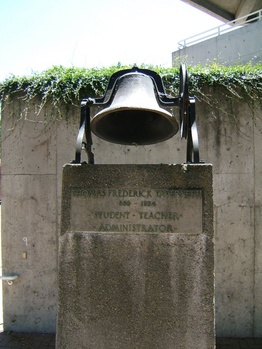 Behind the home side bleachers near Toomey Field, just north of Hickey Gym, there is a bell on a pedestal.

The Aggie Band rings it once for every point scored after Home Football Games, if you hang around long enough to hear them do it.

The bell was acquired from the schoolhouse near Salinas where Prof Thomas Tarvernetti received his early education. The effort to secure the bell as a memorial was lead by Fred H. Abbott in July of 1938. The bell was stolen in a prank, but returned in time for its dedication in October of 1938.

In March 2007 it was moved to the Aggie Stadium. 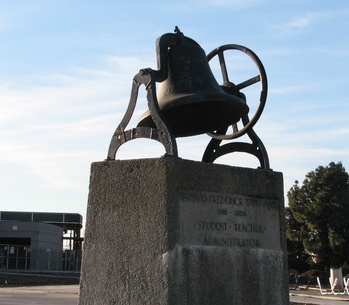 At the Multi-Use Stadium