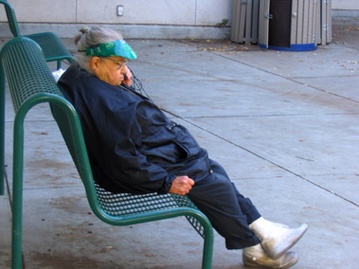 Visor lady is seen here outside of the MU, listening to the radio.

The Visor Lady's real name is Wanda Underhill. Wanda, one of our Town Characters, can be seen around campus and the immediately adjacent downtown blocks, walking slowly but steadily while toting plastic UC Davis Bookstore bags. She spends much time inside the Memorial Union, either eating in the Coffee House, or quietly working in Griffin Lounge. Her nickname stems from the green visor she wears. She is known to live on campus in the Music Building, and she rents a bowling alley locker every year, not for a bowling ball (as you might expect) but rather to hold books. She reportedly possesses campus keys and special access to some areas. Although she is mostly seen on the UC Davis campus, she has been spotted a number of times on the streets of San Francisco as well as other far away places.

Wanda, by all accounts, appears to be a highly intelligent individual who was formerly a professor in the Music Department. She is often seen reading books, working on music, math and physics, or listening to music in the department's building. The California Aggie is said to have banned their reporters from writing articles about her, in order to protect her privacy. Although she is relatively considerate of people's well-being, advising those seated near her to pick up after themselves or that their laptop wires may pose a tripping hazard, she is fiercely independent and bridles at anyone who tries to assist her, whether by holding a door open or by helping her move a chair near a window.

Visor Lady has recently been seen not wearing her visor anymore, but instead a brimmed hat similar to a fisherman's hat. Does this mean that she's no longer the Visor Lady? The Town character formerly known as Visor Lady? Yes. Affirmative. Out side of the MU without a visor but white fisherman's hat.

I haven't seen visor lady in a long time. Does anyone know if she's ok? Where's she hanging out these days? —ArlenAbraham