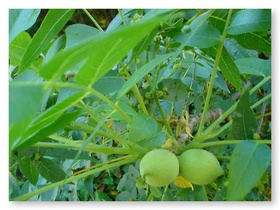 Walnuts in the husk! 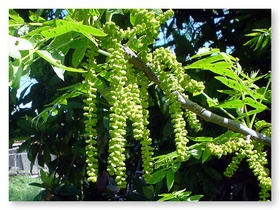 Male walnut flowers are conspicuous catkins containing many tiny spheres. As each opens thousands of pollen grains are released in the air to hopefully reach the pistils of developing female flowers rather than the noses of unlucky humans.

Walnut trees (Juglans spp) are deciduous trees belonging to the walnut family (Juglandaceae), which includes hickory trees (Carya). The 21 Juglans species all provide edible walnuts which can be further divided into the following:

The name "walnut" derives is a corruption of the French "Gaul nut" and are native to Asia Minor and southeastern Europe. Most are grown for their beauty, timber and some for their edible nuts. Walnuts produce both male and female flowers on the same tree which open at different times; because of their offset flowering cycles, trees must be cross-pollinated. The flowers are green, with males growing in long catkins and females forming small clusters. Walnut leaves are one- to two-feet long, pinnate, and formed of 2"-4" ovoid lance-shaped leaflets. Walnuts are typically 2"-3" in diameter and surrounded by a fleshy, greenish husk during the summer; by fall, they ripen and drop from the trees.

Black walnuts seem to be all over Davis. Black walnut wood is reddish in color and is frequently used in joinery because of its rot resistance and ease of use in woodworking. Squirrels, rats and crows drop and bury the nuts which sprout in spring. Though a non-native species, California produces about 20% of the world's English walnut crop, and is the only state within the US producing commercially; most of this production comes from the Central Valley, and about 50% of that production is controlled by Sun Diamond growers co-op headquartered in Stockton. Most walnut tree species will flourish in well-drained, loamy soil, and should be pruned between June and December to encourage the formation of a single, central shoot.

To find out what other plants you may see around Davis, take a look at our Town Flora.